Earlier this week we told you about a mural in Shoreditch celebrating the release of a video game tomorrow (February 3) – we’ve heard about another tribute to Soul Calibur V which literally smashes through this achievement. 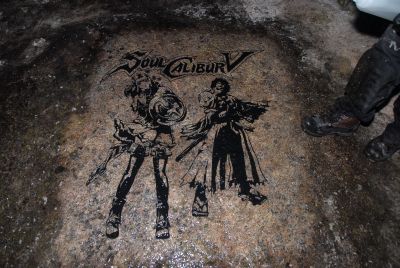 Two characters from the game, Pyrrah and Mitsurugi, have been etched into a granite slab on a Swedish mountain – and unlike the London artwork, this piece is literally set in stone for eternity.

Game developers Namco Bandai have commissioned a local engraver to create the immortal image at the site near Tarum.  The company’s Marketing Director, Lee Kirton, adds: “These characters have only ever existed digitally, so it’s brilliant to record them permanently in a format which remain visible until the end of time.”

“This is the by far most complex and detailed engraving I have ever performed”, says Göran Andersson, who is the sole remaining stone engraver in the region, “but it was very fun to do.”

‘Soul Calibur V’ (BBFC certificate 12, PEGI certificate 16) is out on the PlayStation 3 and Xbox platforms tomorrow.