With Lions release new ‘Touch The Sound’ EP in November

It all started in the fall of 2005 when New York City’s Benzos and Baltimore’s Lake Trout kicked off their US tour at New York’s Mercury Lounge. Flash forward six years as the singers/guitarists for both bands, Christian Celaya and Woody Ranere, now makeup the group known as With Lions. November 1, 2011 marks the kick-off of an ambitious four-EPs-a-year cycle with the first release titled, ‘Touch The Sound’. 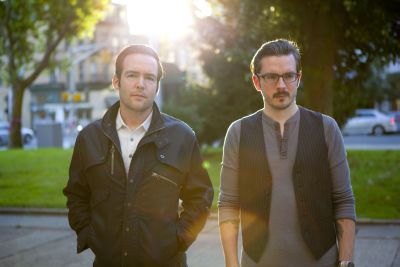 With Lions is both a band and a production team that splits their time between New York City and Baltimore, where they have been composing music for film and TV for the last three years.

After amassing a large catalogue of songs numbering in the hundreds, covering everything from shoegaze to industrial, orchestral to electro, and more, they began to focus on transitioning to the band side of things. They are currently preparing a number of releases, choosing a different approach to catalog their compositions in shorter groupings, such as EPs. Each release will explore a different mood and direction, thus freeing the band from the confines of a certain sound or trademark that their previous outfits were categorised by.

After years of touring on the road and then years living in the studio composing for film and TV, With Lions plans to take a very different approach to releasing their music and connecting with the audience. While not trying to set too many ground rules, they did agree that they would eliminate all creative limitations one experiences when in a band that has a signature sound. That meant that no matter what genre or mood they wrote in, it would be a With Lions song.

Epic and cinematic, With Lions’ EPs are broken into mini scores. Dark, saturated harmony, their music can only be described in film terms. “We try to score life,” says Celaya. Whether it’s a film from childhood or a specific scene etched in your memory, With Lions’ multiple soundscapes revisit it all while moderinizing classical schemes.

For more information visit the official With Lions PledgeMusic.

Check out a free download of the track ‘To Be’ from PledgeMusic.