US hybrid music act World Versus Me is back in the studio recording the follow-up to debut album ‘Duel’ which is titled ‘For A Better Tomorrow’. “I think people are going to be quite shocked with what I have in store for this album,” says multi-instrumentalist and mastermind David Alvarez, the sole force behind World Versus Me. “I feel like things have been boiling up for quite a while now. It’s time to let loose.” 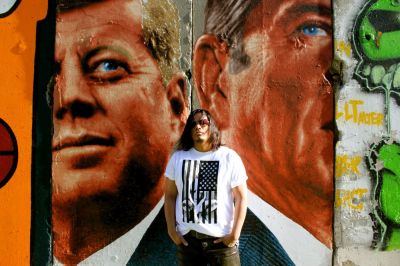 Material from the new album seems to have a strong sci-fi aspect to it, ranging from the drum and bass-tinged ‘Black Sun’ to the electro-influenced ‘Anti Me and You’ to the dubstep and industrial-styled ‘Escapism’ via the electronic rock-infused title track ‘For a Better Tomorrow’. “I am writing this album as if it were the soundtrack to a movie that hasn’t been made yet,” continues Alvarez, “something along the lines of a ‘beefed-up’ ‘Escape from New York’ or John Carpenter’s ‘The Thing’ mixed with a little ‘Dawn Of The Dead’ and ‘Blade Runner’.”

The album is slated to be released in mid-August exclusively on USB flash drive – this can be be pre-ordered here and is set to be mixed by Sean Beavan (Marilyn Manson, Nine Inch Nails). “I think it’s time we let the CD die. Selling CDs is really just clinging to the past without reason. I want to keep my eyes on the future. The flash drive allows me to include studio footage and photos while at the same time, it gives the listener a device they can use over and over again if they store its contents in their computer. They can use the flash drive to store whatever they want for work and school. The future is digital, there is no doubt about it. Personally, I feel in thirty years from now we will have a bio-digital experience with music, but until then I wanted to give people that want my music in a tangible form something that enhances their experience of my album, something a simple CD can’t do.”

For more information visit the official World Versus Me website.