Album Review: The Used – ‘Live And Acoustic At The Palace’

After producing gut-wrenching anthems for fifteen years The Used have compiled a special live album of their acoustic performance at The Palace in Los Angeles, set for release on April 1. 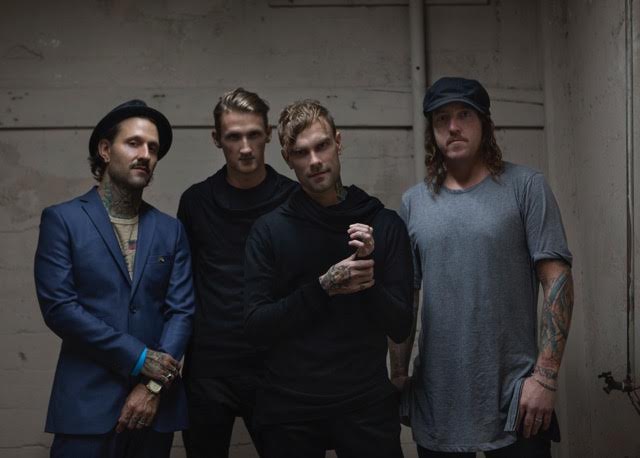 Live and Acoustic at The Palace is a reimagining of the band’s classic dark, unsettling alt-rock style with a four piece string quartet and harpist, a piano player, percussion and a three piece gospel choir joining the band onstage. With a sound that already lends itself well to a theatric orchestration, the album is a collection of twelve tracks presented in an entirely new way.

The album starts with resounding cheers that move in waves as each band member takes the stage. A calming acoustic intro played over stray cheering from the crowd takes us into ‘The Tunnel’, followed by vocalist, Bert McCracken’s, light, recognisable vocals that start the album right with a simple and poignant, stripped-down version of the song, setting the emotional tone for the evening. Immediately, McCracken makes a connection with the audience by pleading to them: ‘Please forgive me if I have to cry the whole time’. After introducing bassist, Jeph Howard, guitarist, Justin Shekoski and drummer, Dan Whitesides the band goes into the iconic ‘The Taste of Ink’ which, predictably, turns into an enthusiastic sing-along, setting a great energy for the evening as the audience echoes the line ‘As long as you’re alive, here I am. I promise I will take you there’.

Tracks like ‘Yesterday’s Feelings’ and ‘Overdose’ reveal beautiful melodies and dramatic twists and turns through gentle percussion and the addition of strings. The use of the orchestra echoes the emotional nature behind personal and emotive lyrics. ‘Lunacy Fringe’ and ‘The Bird and the Worm’ bring out a more aggressive and frantic sound to counter the calm of the evening in the best possible way with dramatic and theatrical twists that bring the songs to a new level, leaving McCracken proclaiming: ‘I’ve never heard our songs sound so amazing’. ‘Paralyzed’ changes the pace with a more upbeat sound, making great use of the string accompaniment, making the track even more haunting with a full sound brought together with the help of the choir.

Stories and anecdotes between tracks highlight the intimate atmosphere of the evening. Playing crowd favourites such as ‘All That I’ve Got’ mixed in with live rarities like ‘Hard to Say’ make for an audibly happy audience with a well-rounded and varied set. A cover of John Lennon’s ‘Imagine’ sees the iconic piano intro joined by gentle guitar strumming and the subtle addition of strings softly guiding the song along accompanied by McCracken’s familiar vocals. Finally, the evening comes to a close with an emotional rendition of ‘On My Own’, using the strings to bring a new meaning to the song.

An emotional and heartfelt album, Live and Acoustic at The Palace brings a new interpretation of some of the very best that The Used have to offer.

live and acoustic at the palacethe used