”Til Death’ strikes you instantly as a much calmer record than the previous effort by Daniel Graves, ‘All Beauty Destroyed’. Rather than ramping up the aggression, here, the music returns to the original soundings of the post-pop/dark-pop movement layered with catchy and well thought-out EDM beats. Those stylings which characterise previous albums are still here, they just layer within haunting synth work to provide innovative and incredibly atmospheric music. The main thematic statement of this album feels to us one of unease and fright, not so much a full-on scare, more a growing creep up the spine. 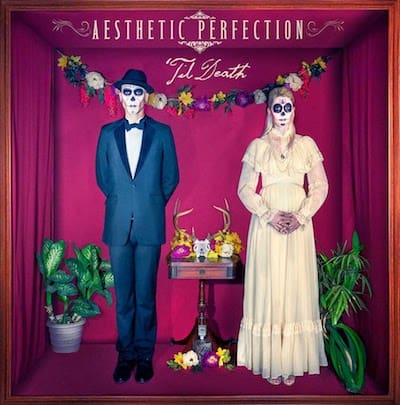 What is most impressive in this album compared to previous efforts is the confidence Daniel now exudes through his vocals. You can see his tangible progression as a vocalist through his records. Comparisons between ”Til Death’ and A Violent Emotion present an artist with a broader range and an innate understanding of how to use his voice for dark dramatic effect. Of particular mention on this album would be the dual harmonies between the synth and vocals at the 3:30 mark in the track ‘Oh Gloria!,’ which works so well, purely based on the strength of Daniel’s voice. If a less-accomplished singer attempted this the effect would be completely lost.

Lyrical themes remain largely unchanged and similar to previous efforts, dealing with alienation, depression, unrequited/forlorn love and other dark emotional issues with are typical for this genre. Whilst not groundbreaking in terms of thematic content, they do aptly fit the music and complement the music adequately enough. Danceable tunes remain despite the change in musical stylings. ‘The Dark Half’, (and to a lesser degree ‘The New Black’) are powerful dance tracks, perfect for the club scene.

Vocal stylings here are a combination between the harsher more aggressive vocals found in much of the modern industrial scene and cleaner vocals. Heavy EDM beats dominate these songs combined with the typical dark pop-culture samples expected in the music of the industrial genre. However, in keeping with the overarching softer stylings of this album, these songs are not at the level of intensity found in previous albums.

Perhaps the most controversial song of the album is ‘Showtime’. Wildly different to the preceding tracks, this is in essence, dark-pop at its finest. Structured around a modulated acoustic guitar with very soft synth work, rhythmically this could be a pop song but Daniel injects enough of the Aesthetic Perfection sound to create a very listenable track for those with an open mind.

A diversifying record, and an important statement against musical stagnation. In a genre which seems to believe that to strive for harsher and harsher music is the only way to move the genre forward, this is a refreshing record built around melody and harmonic complexity as opposed to a linear sonic attack. This record will not be for everyone, especially those rivetheads into the likes of Hocico, Suicide Commando and Grendel. Some may see this as Aesthetic Perfection going softer, but really this is just an intriguing new direction.