Four-piece rockers, Asylums, are set to release their debut album, Killer Brain Waves on July 29. A thoughtful collection of lyrical critiques and discontent, Killer Brain Waves sends shivers of 90’s nostalgia down our spines in just the first thirty seconds. 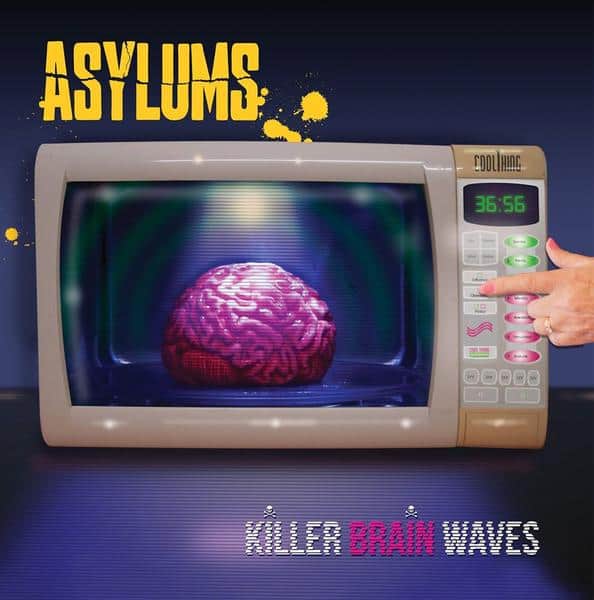 ‘Second Class Sex’ is an immediate burst of energy with a fast guitar intro and frantic high notes, accompanied by mighty vocals. With repetitive riffs throughout that really drive it in, the track starts with a high dose of energy and pushes through, building to the very last frustrated scream and abrupt guitar halt. ‘I’ve Seen Your Face in a Music Magazine’ is a page right out of the 90’s playbook. A carefree fervour creates contrast with pensive lyrics and infectious pop melodies. An obvious discontent is rattled off through a memorable chorus and crooning guitars.

‘Joy in a Small Wage’ is a slower track from the previous two with a more noticeable sensibility with softer, more restrained vocals in the verses, building to an impressive display in the chorus, going into a gentle falsetto in a formulaic fashion that demands attention. Asylums have successfully and artfully managed to not only create, but cement and proudly display their own sound and formula in their debut, which is heard throughout the album in tracks like ‘Bad Influence’ and ‘Missing Persons’ that display range without ever slowing the pace of the collective.

Through the killer melodies and lyrics, the album also has an entertaining, tongue-in-cheek element, heard in ‘Wet Dream Fanzine’ with the opening line ‘I want to know where fantasies go to die’. An impressive stamina pushes a fun track through with a steady flow of lyrics and wavering guitars. Throughout the album, the band have thoughtfully hit on a palatable way to discuss relevant issues, with hints of bands like The Lemonheads and Pixies blended into their own sound. ‘The Death of Television’ temporarily throws the previously heard lighthearted nature to the side and brings in a noticeable vexed tone with a short, direct outburst, quickly ending with the declaration, ‘turn off the television!’.

Tracks like ‘Monosylabic Saliva’ and ‘Born to not Belong’ use a more controlled and pensive sound to convey interesting lyrics and reflect on societal issues, showing a real demand of the craft through well thought out and varied songs. ‘Sunday Commuters’ blends rock with a beloved pop sound that is almost ironically thrown in through group vocals and bubble-gum melodies that work cohesively to counter the angry declarations of ‘staring into advertising space, how graffiti connects, but has nothing to say’.

Our standout track for the album is ‘Slacker Shopper’, coming in straight away with a manic sound and distorted vocals, with a previously unheard dominance that commands attention. It blends more of a punk rock edge with Asylums’ already displayed sound, showing a fusion of genres right up to the very last second. However, just when we think the album has come to a close, one minute of silence later, a hidden track trickles through with slower guitars and a minimal sound, completely different from its predecessor, providing a completely satisfying and unexpected close to the album.

Killer Brain Waves is an energetic, unique blend of genres and sounds, culminating in a memorable debut album from Asylums.