It’s a hell of a ride when a staple hardcore band like Backtrack put out a second album, and like most sophomore efforts in a heavy genre, the intensity is pushed up a notch, or in this case, a few notches, and the result of that is liberating and maddening, from the feedback that drizzles into a steady rant in ‘Their Rules’ – a true punk theme running there, we’re all sick of following THEIR RULES! – and whose rules are they referring to? Well, that’s up to you, because of its open-endedness draws relation to the lyrics, you are one with the track, provided you’re as rebellious as the band, of course – to the metal vibes of ‘Rot In Your Race’. 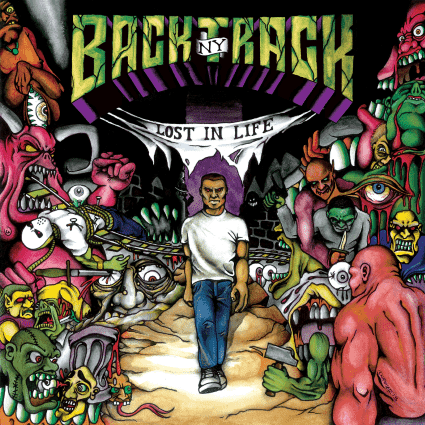 ‘Lost In Life’ isn’t an album with ups and downs, lights and shadows, or any of that sh*t. No, it’s one short and aggressive spiel by a band who have simply had enough. The title track is a fine song, breaking in with brutality, and then bringing in a greater fury in the verses, enhanced by drum beat, which creates a visceral frustration, and unlike the uncertainty laced throughout ‘Darker Half’, namely in tracks like ‘Life’s Plan’, a personal favourite of this music fan, it has an assertive direction, and a certain “F*ck you” to all. Then ‘Under Your Spell’ brings that anger where the vocalist yells with liberation of the desire for a new start. This one is packed with a hundred paces and tones, none of them friendly.

From here it dives directly into more of the same mad energy with ‘Nailed To The Tracks’, which doesn’t f*ck around. This is addictive as hell. That constantly happening interchange of open and muted guitar lines strikes deep within the leisure centre of the subconscious. Elsewhere you will hear more conventional punk formulations, like ‘Tortured’ and ‘Play Safe’, the latter inducing a muted groove that leads to speedy aggression, and then in ‘Rot In Your Race’ you get flashes of metal. The crash symbol works wonders in this one – just listen. The ending of this one sets things up perfectly for ‘Right this Wrong’, a river ridden with jagged rocks, thrashing you all over the place. Grab onto something if you can, if you don’t it will wash you away.

Every successful hardcore band eventually writes a song that goes beyond the normative length. Cruel Hand did it on ‘Lock And Key’’s ‘One Cold Face’, and we’ve heard that Expire have done the same in their new album, and in this case it’s ‘The Way It Is’, which clocks in at 3:18, with every second accounted for, the breakdown half way through the peak of its intensity before the speed picks up again. The abrupt end demands that you go straight back to track one.

This is the sound of anger, of raging within the race we are all trapped in. It’s time to smash out, with Backtrack blazing in the background.