There’s no real way to describe Bad for Lazarus to anyone that’s never heard the self-described “nasty pop” band. Weird doesn’t even begin to cover it, but it’s the best type of weird we’ve heard in a long time. We got the chance to listen to the band’s debut full-length, ‘Life’s A Carnival, Bang! Bang! Bang!’ due to be released July 28 and the tracks on the album are just as wonderfully bizarre as the title. 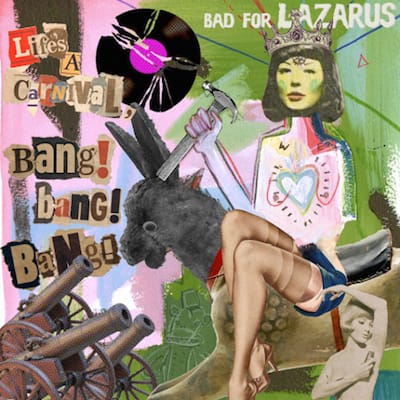 One of too many things that we love about Bad for Lazarus is that they don’t pretend to be anything they aren’t. They write rocking songs with lyrics that sometimes mean something and sometimes don’t (‘My Muddle’), but somehow always create a sound that keeps dragging you back for more. ‘Life’s A Carnival, Bang! Bang! Bang!’ is the perfect example of that attitude, drawing its name from the drug induced ramblings of a friend of vocalist and guitarist, Rich Fownes. With tracks ranging from classic rock formulas to funk and blues influences, this record really has something for everyone. The album kicks off with ‘Tos And Fros’; with a grimy and old-school rock sound from the first chord, this track sets the bar out of sight for the rest of the album, however somehow Bad For Lazarus manage to top themselves with each track.

The album maintains the pace set from the beginning with the band’s latest single, ‘Caught In The Twist’. There’s nothing more that we can ask for in a track than impressive harmonies, rocking guitar solos and some steady cowbell. The album continues the varied and pure fun sound of Bad For Lazarus with tracks such as ‘No Cigar’, ‘Bad Stallion’ and ‘Disco Biscuits (For Breakfast)’. To tie together the wonderful bundle that is ‘Life’s A Carnival, Bang! Bang! Bang!’, the album finishes with the dramatic and perfectly fitting ‘Billiards’. With an acapella intro and a prolonged guitar and keyboard solo, there’s no better way to end the album than to go from one extreme, as heard in the rocking ‘Tos and Fros’, to the other, in true Bad For Lazarus fashion.

What we’re really trying to say is that if you’re already a Bad For Lazarus fan; this album is everything and more than you could ever want. If you’ve never heard the band before, do yourself a favour and get a copy of ‘Life’s A Carnival, Bang! Bang! Bang!’ because it’s f***ing awesome.”