Bleech are back with their next full-length album ‘Humble Sky’ after their debut album, ‘Nude’ released in 2012. This album illustrates how far Bleech have come in terms of writing songs and material. The band feature a greater range of musical influences and experiment with a variety of song structures which shows just how much the band have come into their own since starting in 2009 and releasing several singles and EPs in subsequent years. The track ‘Isolate’ is a great example of this; it’s an acoustic ballad that showcases a sombre attitude. This offering in-particular illustrates that the band have been able to incorporate a greater emotional range in their compositions that lends some great variety to the album other than straight up ballsy-rock. 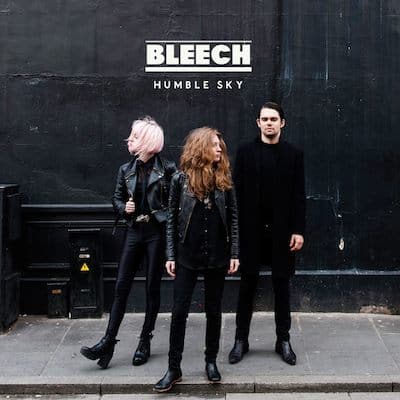 There are also some unexpectedly interesting drum patterns that crop up on this album. Matt Bick’s drum work is impressive in ‘Marching Song’ which delivers a precise drum beat with double bass work which guides Jen O’Neill’s vocals in a regimented fashion creating an interesting song dynamic. The song builds and becomes faster and faster, exploding into a great chorus and because of this, ‘Marching Song’ is definitely one of the standout tracks on this album and is definitely a must hear for people new to this band.

Saying that, great choruses are what Bleech do best on this album. Nearly every song has a big, soaring chorus which is great for singing along to. The vocal melodies that are used in ‘Humble Sky’ are quite masterful. Jen O’Neill and Katherine O’Neill’s (who also plays bass on the album) voices harmonise perfectly to make these choruses memorable and ultra-melodic, even making some of them sound quite angelic at times. Of course this is not the only thing that is applied to the vocals as O’Neill’s voice often carries an almost punk-like snarl to it, during the verses before exploding into the chorus. An example of this would be album opener ‘Not Like You’ which is a great introduction to the album with its crunchy guitars and Jen O’Neill’s vocals that present a layer of attitude that gets you pumped up for the rest of the album. Speaking of which the guitar work on this album has some interesting elements to it other than just massive distorted rock. Some tracks feature clean country-influenced riffs at times while ‘Here I Am’ has some Black Sabbath-sounding riffs which creates a great sludgy sound. That being said though the band on this album does play it safe on a few of the tracks. The tracks ‘Light Up The World’ and ‘Easy Ride’ in particular are honestly so conservative in song structure and the riffs that are used, that the two tracks kind of blend into each other. Because of this these two tracks in particular are quite forgettable. This is a shame because it really makes the latter half of the album not seem as strong and impactful as the first part. However, it’s saved by the end track ‘Grow’ which is a piano ballad, again showing more diverse material and it is also a welcome reprieve from the previously dull tracks and ties up the album rather nicely.

Overall this is a great effort by Bleech which showcases their improving talents. Again, unfortunately there are a few hiccups here and there which slightly blemish the album, but when Bleech succeed in hitting their target, they hit dead centre and this album definitely has enough catchy songs to make this it memorable as well as a great addition to Bleech’s impressive discography.