Album Review: Bombs Into You – ‘Shake’

The first album from Portland, Oregon three-piece Bombs Into You is a mixed bag. The grungy-electro album ‘Shake’ is not one you would necessarily listen to from start to finish. 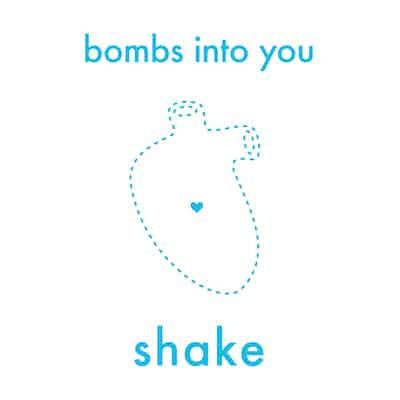 ‘Evasive Me’ is an interesting track that should be focused on from the start. Despite its title, it is a song about caring for someone too much. The lyrics “in bed with your tiny heart” and “it can’t be long until I stick like glue and blow us up” show it is a destructive relationship, which would be better avoided (hence the title). Despite this destruction, the track has soothing vocals and a relaxed, driving beat with vocals will interest fans of alternative rock acts like TV On The Radio. In terms of its impact upon the listener, this song is rivalled only by ‘Six’, an instrumental track which takes a piano line, couples it with a drum beat and distorts it slightly to create a relaxing track with a strong electronic vibe. ‘Try’ also has similar sound, but it is coupled with smooth vocals. This works just as well though; the contrast in the song is spot-on.

The album’s first track, ‘Dizzy Air’ meanwhile, does not grab the attention in quite the same way as these standout tracks. It doesn’t have as compelling a beat and at times it feels slightly confused; the lyrics get slightly lost in this chaos. This is disappointing opener, on album that is successful overall. Perhaps the record could’ve done with re-ordering so as to instantly grab the attention of the listener with ‘Evasive…’. Or, as ‘Six’ is such a successful track stuck right in the middle, perhaps an instrumental track would be a perfect introduction to this album, like The Stone Roses did with ‘Breaking Into Heaven’ on ‘Second Coming’.

Really, it’s essential for any first track to grab the listener’s attention, but it seems especially important here as if listeners switched off they would miss the driving beat and raw emotion of some of the later tracks. Like with ‘Dizzy Air’, distortion is also a bit over-used in ‘Kamikaze’. The distorted vocals give a distressed feel to the song, which is appropriate given its title. But it does seem like Bombs Into You are experimenting with how much distortion they can use. Contrasting this distortion with some cleaner sounds would be more effective – though it would mean that the lo-fi basement rock ethos of the band would take a back-seat. In this writer’s opinion. It would be good to see more experimental tracks from the trio, but it is songs like ‘Evasive Me’ that will gain Bombs Into You success.

Unlike the intro, the ending of the album is fantastic. ‘Sucker’, with its relaxing piano line and soft vocals makes it feel like some of the anger in previous songs has resolved itself slightly and there is a calm after the storm. ‘Sucker’ gives the album a rather blissful conclusion.