Twenty years ago London grunge rockers, Bush, bulldozed the music scene with their debut album ‘Sixteen Stone’. Fast forward to now: the band are back with their sixth album ‘Man On The Run’, set to be released on October 21. 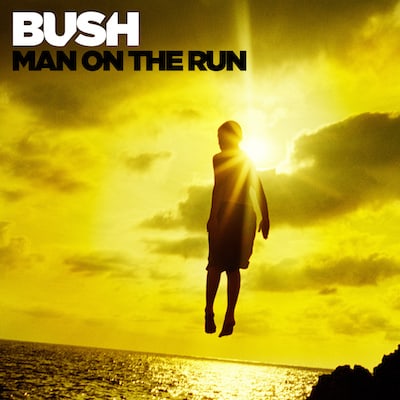 After returning from an eight year hiatus with a new line-up, Bush released their fifth album ‘The Sea Of Memories’ in 2011 which saw some mixed reviews as far as comebacks go, leaving fans more than anxious for ‘Man On The Run’.

One thing that Bush never struggle to do is create evocative, lyrically potent songs and this album is no exception. It holds a collection of well-constructed tracks led by Rossdale’s unwavering vocals, creating a solid album that unfortunately just falls flat as a whole.

The album starts off strong with ‘Just Like My Other Sins’, a propulsive powerhouse track that creates an unmatched energy. This track is a great reintroduction and has just what we love from Bush; dynamic musical displays from Robin Goodridge, Chris Traynor and Corey Britz paired with Rossdale’s renowned vocals to blend contrasting styles together into one rocking, cohesive song.

It can be difficult to meet the expectations of the listener when you start on such a high, and we have to say that the remainder of this album simply falls short. Don’t get us wrong, there are some fantastic tracks that grab us straight from the beginning and don’t let go, such as ‘The Only Way Out’. Lyrically, from start to finish, this track is a juggernaut that combines Rossdale’s signature vocals with tenacious drums, thriving bass lines and staggering guitar solos to encompass a nostalgic 90s grunge ballad vibe.

The album’s title track, ‘Man On The Run’, starts strong with a steady pace that gradually builds while maintaining an anthemic edge with a gripping chorus. But unfortunately the lacklustre lyrics and lack of progression in this track combined with an electronic meets experimental tone leaves us disappointed in what had the potential to be the album’s standout track.

After coasting between fast-paced, stellar songs and ineffective straight-forward songs with no real consistency, the album comes to a head with ‘Golden Age’ which nearly makes us forget the previous thirteen tracks altogether. This is an artfully crafted anthem, laced with nostalgic guitar riffs that starts to give us the taste of adventure that we were longing for through the beginning of the album.

It’s no secret that Bush are a killer band that know how to make a great song. ‘Man On the Run’ is a collection of consistently good tracks, but with no evolution or steady engagement throughout the album, that’s all it is, a few good songs.