After a fairly lengthy break since their last album in 2011, Melbourne band Calling All Cars are back with a new album, emphatically titled ‘Raise The People’. Band members Haydn and James Ing, alongside Adam Montgomery have already gained an impressive stint of success supporting the likes of Queens of The Stone Age and Foo Fighters across Australia. Now seems like the perfect time to take on the rest of the world. 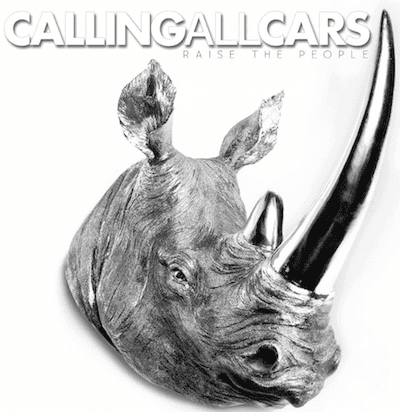 What stands out most with Raise The People is the sheer range of songs and variety of sounds showcased. They don’t necessarily stick to one sound in particular, although rock is always at the centre, but instead bring in the influences of other genres such as dance, punk and indie. It’s an eclectic style, that’s for sure and a brave but effective choice from Calling All Cars.

As you’d expect, the album is full of monstrous rock riffs and sharp guitar hooks, the title track being one of the prime examples as it suddenly erupts in to life with a buzzing guitar riff after lulling you in to a false sense of security. You can definitely hear the Americanised rock sound in Hayden Ing’s vocals – moody, gravelly and full of that good old punk conviction. However, “Running On The Sun” offers another side to the band with soft, soothing vocals, teasing drum beats and a chorus of “la la las” that could be straight out of a Kasabian album. It’s certainly an album full of surprises and perhaps that’s the experience they intended. You never quite know what to expect next.

As the album progresses, you start to get the influence of dance music, albeit quite subtle but that’s really all you need. This clearly isn’t a band that want to diverge completely away from their original rock roots but instead use the influences of modern music to emphasise their sound. And it works! ‘My Red Light’ features a rapturous breakdown in which electric guitar and synth work hand-in-hand to create a sparking, energetic effect. The atmosphere and upbeat nature of pretty much every song on this album is incredibly danceable. You can’t help tapping a foot to the funky drum beats and incredibly catchy rhythms that Hayden and co seem to create so effortlessly.

Arguably, Calling All Cars are at their best when they’re producing heavy exhilarating noise. But it’s not just noise, it’s much much more than that. It’s not simply a racket of sound that a bunch of sweaty teenagers can hurl themselves around to. No, it’s intricate and piercing electric guitars, big choruses bursting with energy and equally raucous drumming. And then there’s the complete opposite to that too with a much mellower undertone. Album closer ‘Good God!’ is the perfect climax to ‘Raise The People’ packing a huge punch with scintillating guitar solos as Hayden bellows out over the riot of noise. It leaves you hanging in the balance, wondering what to do next.

What Calling All Cars manage to do in just ten tracks is pretty impressive. They showcase a broad range of music influences, new and old, whilst never loosing focus or producing an album that feels awkward. According to Haydn Ing, the album name, ‘Raise The People’, was specifically chosen as it summed up the intentions behind the album, “to have a rhythm section that makes people want to move, and melodies that will hopefully get stuck in your head for days”. It certainly seems as if they’ve achieved this, giving a new burst of life to modern rock music.

calling all carsraise the people