Cancer Bats have come crashing back onto the scene after a three year break between albums with their latest offering, Searching for Zero, released this month. The Canadian rockers’ fifth studio album is a genuinely raw, racing collection of unapologetic noise that perfectly sums up the band. 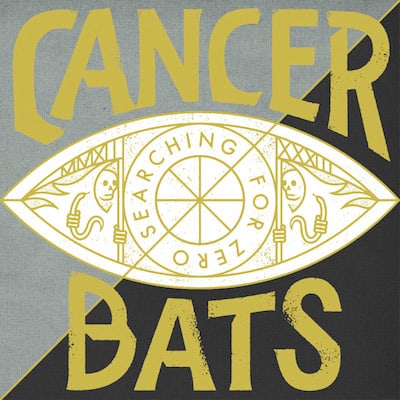 Let’s just get it out there; this album is dark. Truly unsettling, creepy and dark and we couldn’t be happier about it. After 2012’s Dead Set on Living unveiled a more upbeat sound from the band, we weren’t sure what to think. ‘Searching For Zero’ takes a sharp turn away from that, back to the beloved hardcore punk we know and love.

Like a punch to the face, the album starts with the percussive ‘Satellites’, matching anthemic group vocals with squealing guitars to ease us in and create a more accessible sound. Liam Cormier’s tortured vocals hit like a brick wall in ‘True Zero’ with the fitting line, “May I remind myself who I really am?” as we’re thrown into a fast paced, old fashioned punk sound with distorted guitar from Scott Middleton and dynamic drums from Mike Peters. Bassist Jaye R. shines through in the rhythmic powerhouse ‘Curse With A Conscience’, one of the slower, but just as effective tracks of the album.

It’s no secret that the band draw great influence from Black Sabbath, so we’re not even a little surprised to hear Sabbath inspired riffs punctuating the album, made prominent in ‘Buds’. The balance between metal and punk influence tracks is perfectly represented in the production of the album with a raw, gritty sound that still somehow comes across as refined. Tracks like ‘Beelzebub’ and ‘Dusted’ showcase this effect with sinister, raspy vocals and booming riffs to add an overall eerie tone. Starting with a mighty scream, ‘All Hail’ is a 90 second display of fiery vocals chasing down frantic guitars to create a perfectly chaotic addition.

The album’s final track ‘No More Bull Sh*t’ has to be our standout track for this one. With building drums and roaring vocals, this track carries the attitude to match its title. An honest urgency in Cormier’s voice pulls the track through dark, unsettling breakdowns and crescendos, culminating in a restrained, but exhilarating final song.