Centiment have taken Miley Cyrus’ wrecking ball to the parameters that define our genres. The band includes InMe’s Dave Mcpherson, Greg Mcpherson and Gary Marlow as well as Neil Howard and Mark Shurety. Centiment’s debut album has been 4 years in the making, beginning in 2010, ‘Streets Of Rage’ is finally complete and ready to bring you into new musical realms of possibility. They proclaim their music as being “geeky, gamer, tech-metal”, which is probably as fair of a description as anyone could come up with. 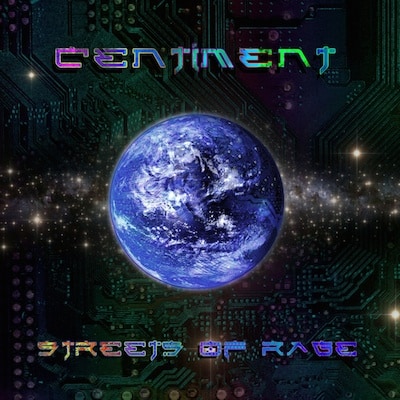 Most people won’t know what to expect when they give this band a listen and album opener ‘S.O.S’ doesn’t break you in easily, it serves up a full course of what you’re in store for with an intro that sounds like you’ve just plugged in your old Super Mario cartridge into your classic Game Boy, followed by a cataclysm of riffage. ‘Hollow Grams’ and ‘Bloodshot’ feature some of the album’s heavier moments, with some truly vicious vocals, before descending into the progressive angle the band have adopted, utilising clean vocals amongst atmospheric melody. It’s a real task to pinpoint certain aspects of songs on this album because there is literally, so much going on throughout every song.

Whilst Crossfaith are the un-refutable masters of their unique party-trance-metalcore, or whatever obscure sub-genre you want to label it, if you subtract the party vibe, add a tech-metal twist and you’ve got an idea of what Centiment are. Their sound goes so much further though, expanding the electronic barriers more than the former ever has. Further setting them apart from other bands is their use of electronica, which varies from bold retro game noises that could be used on an arcade machine game, to dubstep and trance subtleties that are layered brilliantly into the music so that it doesn’t detract from the heavy riffing that takes the forefront.

This is an album that needs to be enjoyed as a whole, not individual tracks, it’s a full experience that’s completely immersive and engaging. Each song is similar to the other but yet has so many differences, there’s songs fuelled by un-restrained attitude like ‘The Kraken’ and more relatable tracks like ‘Defenders of Oasis’.

If the inclusion of three parts of InMe leads you to think there will be similarities between these two projects, you couldn’t be further from the truth, the only similarity these bands share is that they both come under the vast umbrella of metal. ‘Street Of Rage’ will have you hooked in seconds, through genuine appreciation and enjoyment, or out of curiosity as to what comes next. It’s a feast of sonic variation stretching the normalities No matter how many words are written about it, you won’t experience Centiment and their blend of sonic individualism until you pick it up and have a listen.