It’s been proven that Australia can produce some fantastic acts and Aussie alternative quintet, Dead Letter Circus are no exception. There are a lot of things that we like about this band, and their sophomore studio album ‘The Catalyst Fire’ is at the top of our list. It’s not new for bands to try to morph together a wide variety of their influences and put them into an album, but Dead Letter Circus does it too skillfully to be overlooked. The flow of this album is matched only by the skilled musicians who have created it. 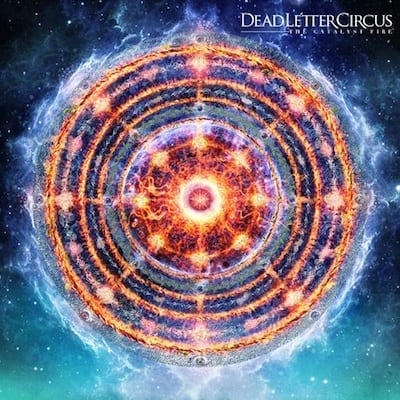 This album perfectly combines so many different sounds; we love how you can hear a little bit of each genre that influences the band without it sounding like a mash-up gone wrong. With a definite electronic influence throughout the album, the hard rock element is still apparent through some heavy drum beats, fast paced guitar solos, forceful bass lines and the unique and powerful sound of vocalist, Kim Benzie’s voice. Benzie’s vocals are striking and fierce throughout the album leaving us hanging onto every word he sings. Lyrically, this album is a juggernaut, laced with messages about being the change you want to see in the world and becoming active, made especially noticeable in the album’s first track, ‘The Cure’.

Aside from the album’s powerful message, the lyrics are supported by some remarkable music that helps to create a memorable record that is sure to grab your attention. From beginning to the very dramatic (and impressive) end, you can hear the energy in every song whether it’s through the dominating guitar sounds of Tom Skirlj and Clint Vincent, the commanding bass lines from Stewart Hill, the perfectly balanced drums from Luke Williams, or Kim Benzie’s killer vocals.

As a whole the album is a fast paced and energetic piece that is genuinely just a lot of fun to listen to. The band’s ability to tie together all eleven tracks on the record in a way that allows you to enjoy them together as one whole piece or separately without losing any of their value or meaning proves how powerful this album really is. ‘The Catalyst Fire’ takes you on a journey, we’re not entirely sure where to, but it’s one we definitely want to go through again.