The humorous and sophisticated Dick Valentine still has the power. Electric Six have been turning the albums over consistently throughout their ten years of satire and madness, the longest gap between them a mere two years, and it’s a blessing to see that they still haven’t lost the ability to laugh and mock society’s activities and indulge in them at the same time, and do so through the medium of great tunes! 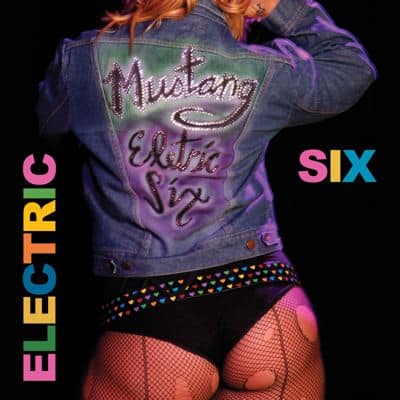 They are, as ever, a comedy band like no other. The strong structure of the tracks compliments the observational comedy and general madness in the messages, rather than the jokes taking the wheel. No, for this band, the songs come first. There are no skits or scattered interludes disguising a fourteen tracker as a twenty-one song album. Tenacious D, you are being judged here. In a friendly and observational way. Fancy delving into the tracks with us? Let’s do it.

‘Mustang’ is indescribable. It’s a rock ‘n’ roll ridden ride on a rare and rambunctious rollercoaster, arguably an introverted rollercoaster that probably got picked on when it was young. It has a rather odd worldview that is open to interpretation in songs like the energetic ‘Jessica Dresses Like A Dragon’ and the sombre and humorous ‘Iron Dragon’, and direct but ambiguous in tracks like the opener ‘Nom de Plume’ or the angry statement of ‘Adam Levine’. The latter has that ambiguity, despite the consistent stamp of disapproval embedded in Valentine yelling Burn in Hell / Rot in Hell / Burn in Hell / Motherfucker. This one is a blast, not just because of the hilarity of Valentine pronouncing ‘Hell’, but its heaviness, vituperative tone and groove make it practically impossible to get past. But when you do, ‘Cranial Games’ will keep you warm both by wrapping you in its layers and stimulating every endorphin in your brain, while ‘The New Shampoo’ will nurse you into a dreamy seventies nightclub vibe. Whaddya know? We described it.

The final tracks encompass many forms of calm insanity. ‘Gimme The Eyes’ has fast and punchy elements, the drums keeping it steady, the bass and electronics snappy and stabbing, and the shy, sweet, squeaky melody gives the track its personality. Towards the end it gets unsettling with the absence of music, but then, it goes full circle and you’re chilling with the easy-going Frankenstein monster again. This album, as we said before, is a rollercoaster, the fastest heaviest moments can be found on the first few tracks, and then it all deviates towards complete disarray, every song unpredictable second by second. But no matter what else it is, it’s fun. Fans are gonna be happy to hear the raw instruments, especially those who were disillusioned by the electronic feel of ‘Heartbeats And Brainwaves’. A great effort.