The chosen few, prepare your eardrums; doom metal masters Electric Wizard have returned, with their much-anticipated eighth album. Following two albums which explored a slightly sleeker, more accessible approach – 2007’s Witchcult Today and 2010’s Black Masses (both very fine pieces of work) – Time to Die has a decidedly darker, nastier tone more reminiscent of the band’s magnum opus, Dopethrone, released in 2000. Steeped in the usual EW cocktail of drugs, Satanism and horror movie imagery, Time to Die is a sludgy, brain-bending bong rip of an album, and for my money, the heaviest thing the band have put out in the last fourteen years. 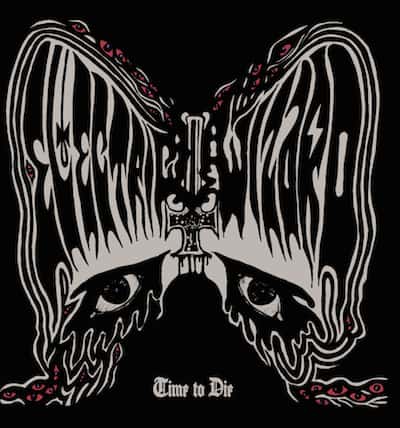 “We wanna get high before we die”, intones Jus Oborn over the crushing groove of opening track ‘Incense for the Damned’. It’s good to hear the impulses that drive the Wizard are unchanged. The guitars are thick and fuzzy, delivering massive, filthy riffs, which are destined to become the soundtrack to doom-laden epiphanies in smoke-filled brains everywhere. On ‘I Am Nothing’, the way the guitars and bass seem to divebomb from the ominous intro into the cataclysmic main riff, lurching like a trainwreck, is incredibly powerful. The album generally sticks to the glorious snail’s pace the Wizard work with so well, stretching out every sound into one swirling, evil soundscape, but there are moments of (relative) speed which keep the pacing sharp (‘Sadiowitch’ bounces along on a nimble groove, perhaps the only track on the album that could be described as a bit sexy, and ‘Funeral Of Your Mind’ is based upon a psychedelic up-tempo riff which really sounds like it could be from a lost Black Sabbath track).

Time to Die is not what you might call a ‘pleasant’ album. In fact, it sounds thoroughly fucking evil. Audio samples mention Satanism, suicide and murder, and of course, drugs feature prominently. But then, while these are aspects which may scare off many, they will thrill the devoted cult of Electric Wizard fans. So dim the lights, roll one up and rejoice: the Wizard are back.