Album Review: Failure – ‘The Heart Is A Monster’

Home » Album Review: Failure – ‘The Heart Is A Monster’

With the twentieth anniversary of ‘Fantastic Planet’, alternative rock band Failure’s greatest and most enduring work coming very soon, you could be forgiven for accepting the fact that the most we would see from this band again would be some sort of re-release celebration, and many would have been content with that. Happily however their reunion in 2014 promised more fruit than a simple comeback tour and the part crowdfunded ‘The Heart Is A Monster’ was announced as being on the way, marking the complete return of a band that has been missed for so long. 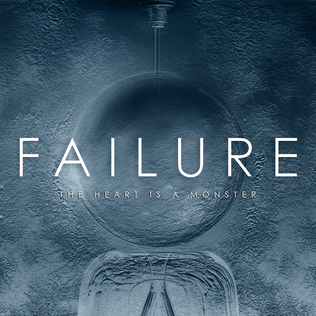 That amount of waiting also ferments expectation and it was always going to be tough for Failure to please everyone with new material but happily ‘The Heart Is A Monster’ is no, er, failure. It starts slowly, the band choosing to split the album up with segues that are numbered chronologically, following on from their aforementioned seminal work, easing you in to an album that comes in at over an hour long and washes over you in that usual Failure way, dreamlike and spacey, with just the right amount of edgy, sharp riffs to ensure that they stick in your head. Vocalist Ken Andrews’ powerful singing voice can either dominate the song as in opener ‘Hot Traveler’ or fade in to the background of more interesting instrumental work like in bombastic track ‘Atom City Queen’, showing that he knows just which songs need more vocal direction and which can rely on instrumentation to create the ethereal atmosphere that Failure specialise in so remarkably.

This is the pattern for the rest of the work. Failure don’t rest on their laurels but take their old themes and come up with new ways to express them, songs like ‘Counterfeit Sky’ epitomising this, with its warbling, effects-laden lazy guitar riffs and pounding drumbeat it’s perfect for putting on in a dark room and being swept away in the atmosphere of it. Follow-up ‘Petting the Carpet’ is an example of Failure at their best, powerful basslines and layered guitars building in to a song that hypnotises with its repeating riff and Andrews’ dreamlike vocals. It’s an example of where the album really works, when they get the balance right between production and the raw power of the songs in a similar way to ‘Fantastic Planet’, but with additional themes and styles.

The moments when the album lapses a little aren’t awful, merely forgettable. ‘Mulholland Dr.’ passes by in a bit of a haze, the definition of filler which is a shame considering the quality of the previous two tracks, it relies too heavily on its attempt to be a serene antidote to the assault of powerful riffs and basslines in previous tracks, and instead becomes a little too dreary for its own good. ‘Fair Light Era’ finds us attempting to return to the same level as previous songs as the formula is revisited, but with less convincing results.

This next segue comes at just the right point, a palate cleanser of noises that wouldn’t be out of place in a trippy sci-fi movie that transport you to another world for a minute or so, allowing for the band to reset and have another go with ‘Come Crashing’. This song passes by in a pleasant haze, kicking in to action in the final third for a satisfying conclusion, and a nice setup for a finale that is arguably the best section of the album.

‘The Focus’ rumbles in to action, the riff instantly memorable and the drumbeat the kind that doesn’t leave your head for days, quickly turning it in to one of the tracks of the album. It’s a cornucopia of fantastic moments, each section of the song outdoing the last, and it’s the sort of song that reminds you why you were so keen for this band to make this long-awaited return. The end of the song, where the bassline and main riff are locked in battle is arguably the most satisfying minute of the whole thing, and makes this song the one you shouldn’t miss.

After another segue we are met with the final track on the album: ‘I Can See Houses’. This track is another gem, built on the back of a gorgeous bassline and Andrews’ coaxing voice, it’s the musical equivalent of a comedown, setting us up for the end of the album wonderfully and with no shortage of trademark Failure musical texture, the soundscape as full as usual with conflicting guitar lines and some wonderful counteracting riffs. ‘Segue 9’ takes us to a satisfying conclusion and rounds off an album that definitely has its ups and downs, but really connects when it hits, with songs like ‘Atom City Queen’ and ‘The Focus’ sure to be classics. It’s good to have Failure back, and hopefully this very solid return is a sign of things to come for the band.