Who would know that South Wales is the home of hardcore rock and metal? Well, it’s highly unlikely that it is, but Welsh metal team Falling With Style beg to differ. Introducing us to their new album ‘Lost & Found’, which was released March 30, Falling With Style certainly give us something to fall over in style over… excuse the pun. 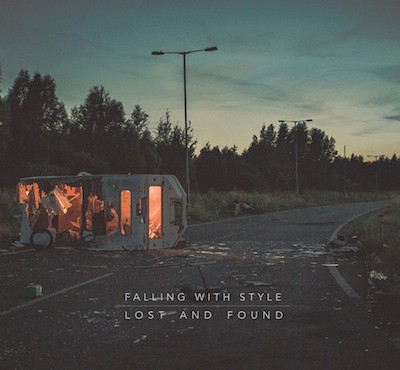 With Lucas Woodland on lead vocals, Ryan James on lead guitar, Scott Carey on guitar and backing vocals, Ben Elliott covering bass and Thom Pike behind the drums, the hard-going troop provide our ears with the hard-core rock/metal we are in such desperate need for with only a rather minimal 7 tracks.

Opening the album is ‘Pilot’, a 43 second piece that barley crosses the official ‘song’ barrier. Consisting of relatively mild yet energised guitar riffs and a strong, steady beat, this track warms up the ears in preparation of what is to come. Like watching the pilot of a TV series, but a 43 second long one.

Following is ‘Heavy Measures’, bringing us splashy drums and speedy guitar riffs complemented by Woodland’s powerful and intensive vocals. The pace fluctuates throughout, giving this heavy rock number a small yet visible progressive side; preventing the song from being too repetitive which can be a bit of a turn-off for some listeners.

Third track ‘Deathbeds’ is similar to ‘Heavy Measures’ with a speedy pace that is joint by frantic guitar riffs and energised vocals. However, in relation to the title, Carey’s negative-style vocals are present alongside Woodland’s signature voice throughout the song. This adds an extremely metal element, demonstrating the Welsh rockers are not afraid of adding something a little different to their music by stepping over the line of nice and easy rock. Despite negative vocals having their scarily good advantages, they can be slightly alarming to some listeners, or just simply horrifying to the non-metal community.

This fast and energised pace that Falling With Style have so simply made their own is also present in tracks ‘Paper Thin’, ‘Solace and Safety’ and ‘Daylight’, making Lost & Found overall an exciting and pumped production that listeners won’t tire from banging their heads to.

However, track (or secret project) number four ‘SO5E14’ doesn’t follow the unique sound that has been used throughout the rest of the album. With the use of gentle, slow drum beat and soft plucks of guitar, Woodland produces quiet vocals that, whilst being out of character, blend beautifully with the harmony of the track. Even though most would deny, most metal-heads have that soft fuzzy spot for a hushed and gentle harmony; and Falling With Style have certainly delivered the perfect one.

Falling with stylelost and found review