London singer/songwriter, Frank Turner, is no stranger to baring his soul in his music, as heard in 2013’s deeply personal Tape Deck Heart. Turner’s upcoming sixth studio album, ‘Positive Songs For Negative People’, set for release on August 7, is no exception with varying musical styles accompanying honest and sincere lyrics. 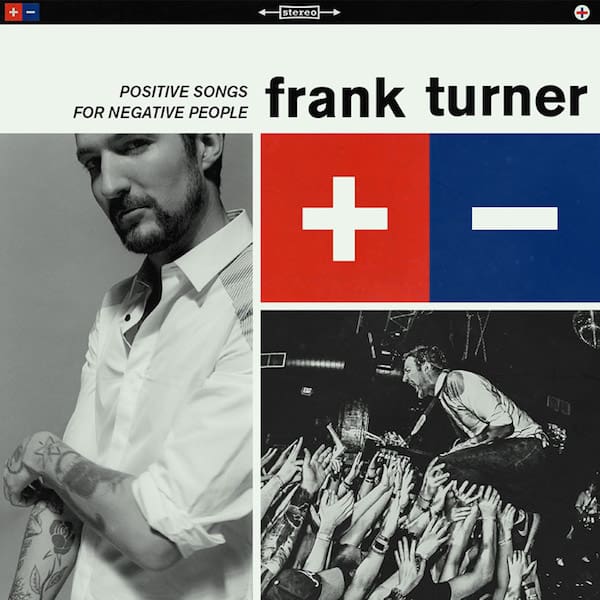 The album was recorded in nine days in Nashville, Tennessee with Turner’s backing band, The Sleeping Souls and producer Butch Walker. Positive Songs for Negative People is a masterfully constructed album that deals with real, personal issues, unveiling a new chapter to the story in each track.

Kicking it all off is ‘The Angel Islington’, a gentle acoustic track providing a tribute to North London. The strumming reflects the vocal melody and accentuates Turner’s pure and simple vocal range with an upbeat, calming sound. The calm is quickly abolished with ‘Get Better’, an in-your-face, passionate punk rock anthem that’s driven by classic, aggressive bass lines and dynamic drums. Turner’s poignant vocals burn each word into your mind, painting a vivid image in each track.

Throughout the album, Turner maintains the ability to combine elements of folk music through creating descriptive story-telling lyrics with an amalgamation of styles and genres. Tracks like ‘Glorious You’ and ‘Josephine’ unveil Turner’s rock roots with driving bass lines pushing through violent drums and scattered guitars only to be countered by relaxed and melodious tracks such as ‘Mittens’. Similarly, ‘The Next Storm’ arrives in a blaze of glory with an uplifting piano intro leading to an inspiring and positive track with the declaration “I don’t want to spend the whole of my life inside. I want to step out and face the sunshine”. Group vocals echo Turner’s exclamation of ‘rejoice, rebuild, the storm has passed’ to provide an anthemic outburst.

Country and folk influences shine through in tracks such as ‘The Opening Act Of Spring’ with twangy guitars and jubilant harmonies and ‘Love Forty Down’, bringing a more classic folk sound to the album with subtle guitars and chiming harmonics. ‘Out of Breath’ and ‘Demons’ continue to push the pace of the album with fast, frantic intros and soulful vocals. Undoubtedly the album’s standout track for us is the final track, ‘Song for Josh’ an emotionally potent acoustic eulogy for Turner’s friend, Josh Burdette. The track is a live recording of the touching tribute with apparent sadness in Turner’s vocals that beautifully brings the album to a close.