The validity of darker themes championed many of the more successful  industrial artists have been ebbing in and out over the last 10 years. With older acts attempting to stay up-to-date with the newer of acts and therefore losing the style and sound they are known and loved for. Fortunately Gary Numan is not one of these artists. 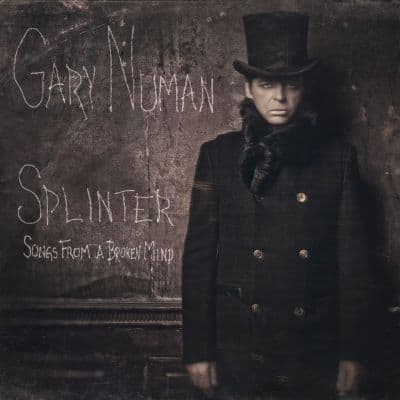 It’s true over the last decade his work has changed (some say for the better) to accommodate a darker audience, but he’s never lost the misery in his voice and the sorrow in his lyrics, to which this writer says ‘Splinter…’ is his best work to date. He seems to have taken the experiences of his previous three works and  all the anger and bleak memories that helped to craft them, thus making a truly astonishing piece, keeping the woe at 11, and his throne as king of the synth firmly in his house.

Opening with ‘I Am Dust’ the album comes roaring at you through your speakers. Rising from the ashes of Trent Reznor’s last few attempts (‘The Slip’ being a good example of a lack of imagination) and seeming to be almost an ode to Type O Negative with its unapologetic heaviness; it’s sure to become a firm favourite to fans especially live. Its follow up ‘Here In The Black’ takes a little longer for this writer to love. The build up takes its toll after a ripping riff that is sure to make any crossover music fan’s neck turn in interest, but soon boils down to a simmer. Stand-out track is the emotive tale of broken relationships and personal struggle that is ‘Lost’ . If a lament is what you are after however, ‘Lost’ is sure to be up your street. With an eerie drone being partnered with a single piano following his dulcet tones, this track is near perfect, and an offering that may soon be hailed as Numan’s very best.

Sticking to his guns and not falling into the traps of a dubstep-esque reinvention (can you imagine Gary doing dubstep? No thank you very much!), Numan keeps to his own style with the slightly euphoric ‘A shadow falls on me’ and the deliciously dark ‘Where I can never be’. With distortion and a sour taste left behind it ‘We’re The Unforgiven’ keeps the listener in the faith that Numan is still venomous, vitriolic and utterly relevant on a global stage. Meanwhile, ‘who are you’ marches us headstrong towards the sombre ending in the guise of the post-apocalyptic lullaby that is ‘My Last Day’.

As a record, its title delivers just what it suggests: A look into the mind of an old-school electro legend battling his inner demons. The thought and beauty put into this record has made this a perfect soundtrack for its unleashing just before Halloween.

STREAM THE ALBUM BELOW: