York-based band Glamour of The Kill are a band which have always slotted easily into the metalcore genre without ever really differentiating themselves. Their debut album ‘The Summoning’ was met with an appreciative hum but it is about to be succeeded; their new album ‘Savages’ is a faster and more aggressive compilation of songs which stomps a yeti-sized footprint on the metal scene as we know it. Savages feels like the record that will make them – dropping this just before they head out on tour with Papa Roach might just be the fire-fuelled jetpack to propel them to stardom. 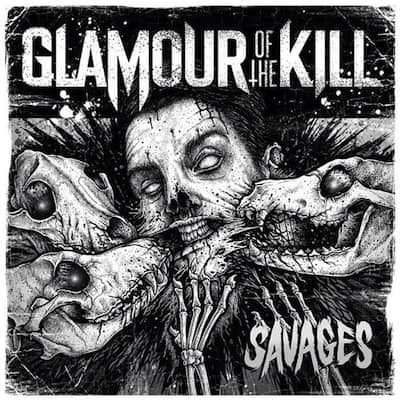 This is their first recording with Steamhammer / SPV Records and it illustrates a huge leap in production; it is clean, polished and commercial and in this case, that is no bad thing. The lead single demonstrates this point beautifully; ‘Break’ (featuring Michael Vampire of Vampires Everywhere!) stormed the UK, pistons firing with its catchiness, memorable chunky guitar and bass sounds and a one-fist chorus.

‘Second Chance’ is an all guns-blazing number, their heavily glam influenced roots shine through yet thrust them forward with giant Maiden-esque drums, harmonized guitars, thrashing riffs, soaring melodies complemented by sing-a-long moments, “I don’t want to live forever but I don’t wanna die/ I need something to believe in/ I wanna live my life.”

Collectively, they are shaking off their metalcore genre taglines in favour of letting Davey Richmond loose and making the vocals just…happen, and while the lyrics sometimes lose their punch in amongst platitudes of the everyday, the songs themselves don’t. ‘Live For The Weekend’ is a mixed tempo number, haunting with its synths yet remains crushingly heavy. By contrast ‘Freak Like Me’ has layered dance inflections, gang vox and Crue style motorbikes to complete the anthemic sound of a down and dirty robust rock song.

‘Heartbreaker’ offers a dose of the Danny Elfman-style theatrics, teetering on the balance between the sledgehammer heaviness and the moodily melodic. The steady, hard hitting rhythm section of ‘Rescue Me’ is completed by the tightest breakdown and burst of insane metal shredding – the complementary soulful heartbreak vocals make this a stomper of a track.

Thankfully, there is only room for one from-start-to-finish ballad on this album, ‘Tears Of The Sun’ portrays a softer side that feels like a mellow Bullet For My Valentine b-side. The album finale ‘Welcome To Hell’ is huge with the musical and instrumental layering that the whole album hinges on, a battle cry of a song with the gates closing in.

‘Savages’ is an achiever of an album, full of depth and control, finally these guys are arena ready.

Glamour of the Killsavages album review