Creating unique and captivating music has become somewhat of a rarity in recent years, and being left unable to define a band and its sound has become a seal of something special. Cue York based five-piece, Halo Blind. 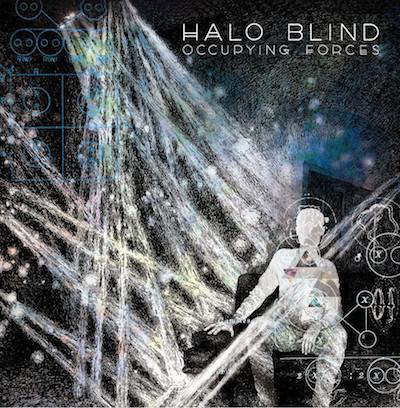 Formerly known as Parade, and releasing their debut album ‘The Fabric’ under the same name, Halo Blind have broken the mould. Their unique sound has made them instantly recognisable and gained them a hefty following from the progressive rock community, along with an invitation to play at the Isle of Wight Festival.

Elements of indie and progressive alternative rock are noticeable in the band’s music, but the release of their highly anticipated second album ‘Occupying Forces’ brings with it a whole new musical undercurrent.

‘Occupying Forces’ immerses the listener in a cocoon of sound from the moment they press play. The opening notes of ‘Better’ played hauntingly on piano, are soon accompanied by a build up of guitars and drums. The vocals, reminiscent of Thom Yorke, create a rock-meets-Radiohead feel, that sets the tone for the rest of the album.

The use of layering throughout ‘Occupying Forces’ creates a dynamic soundscape, most notably on the track ‘Brain Dog’. The gradual build up of sound coupled with distortion conveys the creeping sense of urgency and raw emotion that the song is describing lyrically.

Weaving a harmonic web throughout the album are the vocals of Chris Johnson and Andy Knights. Most notably on the tracks ‘Mirage’ and ‘False Alarm’ the carefully constructed harmonies both clash and compliment, in a way that can leave you feeling unsettled and secure all at once.

With influences such as Sigur Ros, Pink Floyd and Boxer Rebellion, it is hardly surprising that Halo Blind have come up with such an interesting musical identity. Their unique hybrid of experimental and mainstream styles work in their favour, allowing them to put a twist on what has been, and refresh its appeal for a brand new audience.

The track ‘End Of The First Side’ is an interesting example of Halo Blind’s versatility. An instrumental piece with an almost jazz/swing style, it stands out from the rest of the album like a rogue solar flare. Beginning with a simple piano chord progression and building into a melody played on brass, the track is a welcome break from the other emotionally charged songs on the album.

Despite being unable to summarise with one genre, Halo Blind’s new release is a fantastic example of creative, captivating song writing. The emotional depth within the vocals act as the cherry on top to the album, and the overall product is nothing short of beautiful. If you do one thing today, open your ears to Halo Blind.