It’s a new year, a new start and that means new albums too. One you should keep your ears out for is ‘Everything is Fine’ from Hawk Eyes. 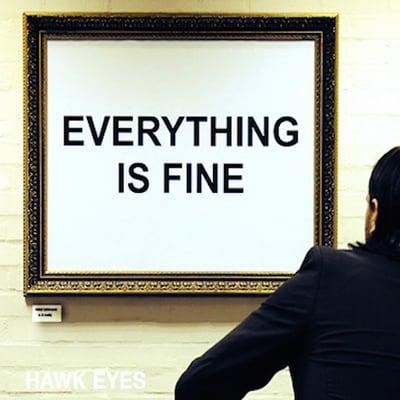 Listening to this album is like a trip back to the best in metal and alternative rock from the early to mid-2000s. You’ve got your gravelly vocals, your riffy guitars and killer solos. It harks back to the heydeys of acts like Tool, Disturbed and Mudvayne, but Hawk Eyes have freshened it all up into this new kick-ass record.

Hawk Eyes gave us the first taste of what’s in store with ‘Everything Is Fine’ when they released the video for the track ‘Die Trying’ around the back end of 2014. A heavy song, driven by riffs and a catchy rhythm. A nice little introduction to what’s to come on the album.

But while ‘Die Trying’ will get your head bobbing, it’s only a small taster of what’s to come. It doesn’t delve into the same high octane energy or the epic melodies that some of the other tracks on ‘Everything is Fine’ do.

The boys from Leeds know when to unleash a flurry of energy, as proved on tracks like ‘I Never Lose’ and ‘Everything is fine’, but also when to hold back. Album-opener ‘It’s A Trap’ is a great example of this, the groovy guitar and melodic vocals makes you feel like something is building but the band won’t let on what it’s leading to so early on.

Closing track ‘TFF’ is also much more chilled out, with slow bass lines and soaring guitar that build up gradually. The many-layer ending to the song is just epic and designed to leave you with a good feeling about the record you have just listened to. It’s a nice record to bring you back down and into the real world again. Or, you know, to the play button so you can go back to track one.

Hawk Eyes started writing ‘Everything Is Fine’ back in 2012, whenever the creativity found them. That was in between tours and shows that saw them supporting the likes of System of a Down and appearing across the pond at SXSW festival. The band are set to go on their own headline tour during February, supported by God Damn, when they will also be releasing ‘Everything Is Fine’. They’re even selling signed copies of the album with tickets to their shows on their Pledge Music page.

If you like your rock music heavy then let Hawk Eyes into your life in 2015.