In Flames are certainly no slackers when it comes to producing hard-hitting heavy music, with a pretty impressive back catalogue spanning over twenty years and quite possibly a few greys here and there! Now the Swedish metal heads are on to their tenth studio album ‘Siren Charms’, a record which took just six weeks to record after the band moved to legendary German studio Hansa Tonstudio. A brave move to record and produce an album in such a short time period, but nothing these mega Swedes cannot cope with, right? 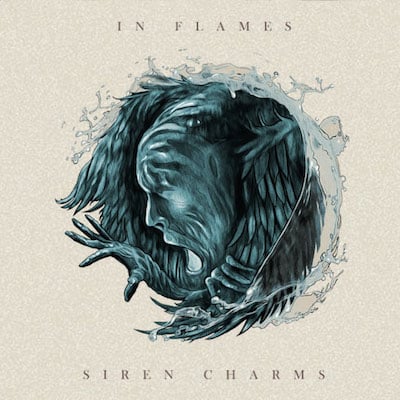 The album begins in charismatic fashion with ‘In Plain View’ and In Flames prefer to hit the ground running as it builds up from bass induced synths, to full on electric guitars buzzing with energy.

Throughout, frontman Anders Fridén vocals show a range of different techniques throughout the album, ranging from blaring screams to powerful wails. It’s very varied in this sense but Anders is at his best when he’s screaming out lyrics with sheer passion.

The two singles released prior to the release of this album, ‘Through Oblivion’ and ‘Rusted Nail’, are the stand out tracks of the record with shimmering guitar solos and fearsome drumming, as Fridén lets rip during the chorus. There’s a definite sullen mood to this album on the whole, characterised by the gritty, raw sound. The cascading breakdowns that feature in almost every song are distinctly emotive, but apart from that, they lack the overall intensity we’re used to.