The words ‘singer/songwriter’ tend to bring certain preconceptions to mind, especially when referring to women, but Lauren Henson, otherwise known as Indiana, is quickly flipping any stereotypes upside down with her unique and dark sound. 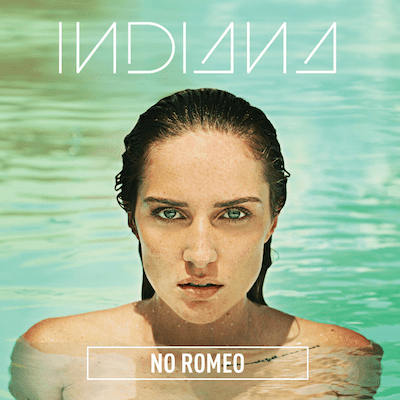 The Nottingham singer’s debut album, ‘No Romeo’, set to be released on September 1st, provides the world with a great introduction to Indiana’s sound, showcasing her impressive vocals backed by harmonies and music that don’t exactly fit into the cookie-cutter mold of female singer-songwriters.

Make no mistake, ‘No Romeo’ is a heavily electronic album, but don’t let that put you off. Indiana’s unique twist on electronica with heartfelt lyrics and alluring vocals draw us in from the very beginning with the album’s first track ‘Never Born’. Most tracks on the album provide a great showcase of Indiana’s impressive vocal range over a steady electronic beat that makes us want to hear what she has to say. Songs about breakups and heartache aren’t exactly a new concept, but Indiana’s dark and vengeful twist on the typical break up song brings a much needed breath of fresh air and a feeling of empowerment with songs like ‘Play Dead’ and the album’s aptly named title track, ‘No Romeo’.

Although we love the images painted through the lyrics in tracks like ‘New Heart’, the album doesn’t really go anywhere musically or challenge itself. About halfway through the album each track, albeit impressive to begin with, starts to merge into the one before in a repetitive and numbing way. Overall, ‘No Romeo’ is a good new album worth listening to for Indiana’s impressive and intriguing vocals layered over some solid tracks, but that’s about it.