Album Review: Johnny Foreigner – ‘You Can Do Better’

If you thought Johnny Foreigner were going to rest on their laurels after taking on the world and winning (on their own terms, of course) with 2011’s excellent ‘Johnny Foreigner vs. Everything’, you’d be dead wrong. ‘You Can Do Better’, they tell themselves, via their fourth album’s title – though perhaps it’s addressed to the the listener, or a pre-emptive swipe at any potential critics. Having finally convinced long-term collaborator Lewes Herriot (he does all their amazing ghost-themed art) to join the band, this is JoFo’s first record as a four-piece – and as you might expect, the addition of a second guitarist means that ‘You Can Do Better’ is a louder beast. It’s also a leaner record too, being 6 songs and 15 minutes shorter than its predecessor – but while it may not equal ‘…vs Everything’ in quantity, it does its damnedest to match it in quality. 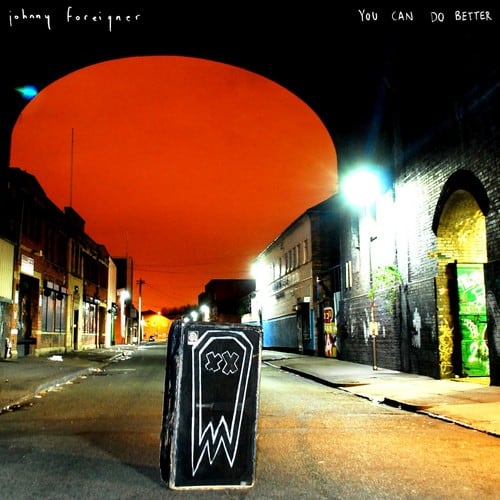 ‘Shipping’ kicks off the record with what sounds like a plane taking off, before the band’s trademark razor sharp guitar riffs kick in. It’s angry, damaged and yet somehow defiant (“In broken things we trust”), indicating that this is the kind of record where emotions run high – though long-time JoFo fans will know that this is par for the course. ‘WiFi Beach’s title might have been inspired by the band’s discovery of a real life WiFi beach in Croatia during their last European tour, but the song itself dreams of escaping with a loved one to a fantasy place where “there’s the tide, there’s the breeze, and there’s you.” ‘To The Death’, on the other hand, sees the band clinging desperately on to a disintegrating relationship (“Here’s to the death/to the holes in whatever’s left.”) as guitars squall and rage around them. It’s not all doom and gloom though – ‘Le Sigh’ offers a cheerier feel, even as the band go about putting the boot into the “B-Town” scene (“Every playlist came with a cost, you get the Peace that you deserve”), appropriating a Nine Inch Nails lyric and using it to highlight the derivative nature of those bands – “a copy of a copy of a…”

JoFo have never been a band to shy away from self-awareness – evidenced here by the fact that they’ve named a song ‘Stop Talking About Ghosts’ and thrown in some Pac-Man sound effects for good measure. For the uninitiated, literal and metaphorical ghosts are a predominant theme in the band’s lyrics and artwork – it’s fair to say that the band seem to have had more than their fair share of failed relationships, broken friendships and testing times. But as the song’s emotionally raw chorus reminds us – “the hardest part is letting go.” Stepping away from buzzsaw riffs for a moment, one thing that ‘…Vs Everything’ proved without doubt is that the band’s quieter moments are as vital as their loudest ones, and ‘You Can Do Better’ continues that legacy – most obviously on the stunning ‘Riff Glitchard’. Sounding like a post-rock soundscape played in double time, the song’s lush instrumentation evokes a hazy, night-time atmosphere. Kelly’s voice cuts through this bliss with disarming clarity, gazing across a twinkling cityscape and ruminating on the nature of a distant love – “I might as well be an organ in your body, the damage I do when I do nothing.” The song then gently unravels itself as it drifts towards its peak, before ambushing you with a thrilling finale.

The band’s subtler side also shows up towards the end of the record – you might expect a song entitled ‘DEVASTATOR’ (all caps necessary) to explode into action right out of the gate, but it’s actually more of a slow-builder. The ‘DEVASTATOR’ in question is not a face-melting guitar riff, but the heart-wrenching culmination of a relationship, with the song’s climax building from quiet tension to spiralling chaos – and then abruptly, it all ends, leaving nothing but a muted drumbeat that mirrors a rapidly beating heart. But after a sharp intake of breath, a coda of sorts emerges, in “hidden” track ‘To The Deaf’. It’s a quieter, more reflective way to finish the record, and another timely reminder that this is a band very much informed by their surroundings (“we’re as brutal as brutalist gets”) – and also a band that won’t give up easily (“my throat might be wrecked, but I don’t think I’ll stop ’til I’m deaf”). But like a light at the end of a long, dark tunnel, there’s one final, unexpectedly brassy flourish that means the album ends on a positive note.

I’m sure there will be at least one review that sneeringly turns the album’s title against it for a cheap laugh – this won’t be that review, however. Sure, the band could do better, but only in the sense that we all could, hypothetically – because ’You Can Do Better’ is another brilliant collection of exhilarating, heart-on-sleeve indie-rock songs, and that’s exactly what Johnny Foreigner do best.

Johnny Foreigneryou can do better review