Taking this long to get round to listening to a hardcore album as awesome as King Nine’s ‘Scared To Death’ is sacrilegious, and not in the rebellious, punk esque way. It’s fair to say that the vast majority of the aficionados of this mighty genre have been blasting this one out for a long time already, and our words are most likely something the fans have already thought, or something the critics have already nailed, which would be the same thing really. 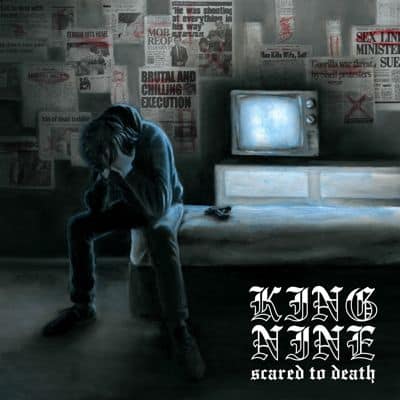 Nevertheless, if you’re one of the few who have managed to refrain from sinking their teeth into this one, stop refraining at once and get it! Last year saw some great efforts, but this is easily one of the most powerful. It’s laden with jagged catchy riffs and groovy drum beats to compliment them. King Nine are clearly one of those feedback-ringing, gritty bands that aren’t afraid to get filthy, and this album is proof of that. The vocals are like a bottomless well of rage, ranting, venting, with the world backing them up on everything they say, and they are strong as ever in ‘Made To Feel’, a roaring track that expresses some pretty dark feelings. Elsewhere the tracks switch between quick verses, and breakdowns. Hell, let’s just say it, the entire album is like one huge breakdown, riddled with enough curve balls to keep your attention hooked throughout the ride, but ‘Murder in the Second’, with its mad alternate picking, picks up that speed with every passing second like a determined athlete with a temper. This is followed swiftly by ‘Free Will’, which takes the album up a notch – just when you thought you were settling into the groove, the track pours a purified lake of fire through your ears.

There are chilled moments too, like ‘D.F.Y’, which starts off with a hypnotic riff that makes excellent use of the bottom strings, but then it picks right up, drums crashing, and throws in a subtle solo that blends into the angry distortion without taking centre stage. As we get to the middle we hear some pretty long tracks, but again, the music has so much to say that you wouldn’t dream of losing attention. There are a lot of moments there for the sole purpose of building up to the explosion, and then you get the climactic final minute and a half of a track like ‘Still Anticipating’, which is ace. That moment in the middle when the riffs go into double tap and then the drums kick in and everything melds together in a fury…THAT’S the moment we’re here for.

‘Damnation’ is full to the brim with riffs that drop and roll and scream ferociously while the drums keep their cool, and the ending serves you that previously mentioned lake of fire for lunch. Mmmmmm….Makes you want to punch babies in the face. Like ‘Free Will’, ‘Blind Eyes’ is another highlight, and ‘Boiled Love’ is pure nonstop momentum. A fine album, and one that will vocalize many frustrations for us in the future. Sweet, sweet liberation! Ah!