Speed, aggression, and melody, with you shouting along to it with a fist in the air. That’s the image Max Raptor have conjured with their new album ‘Mother’s Ruin’, and by the way, that title is awesome. So bleak, as though the members all have that opinion of themselves, of a rebellious nonconforming mind-set which in the eyes of conventional society, is a ruin. Sons who refuse to be contained by the rules. And that’s the nature of punk, it’s that part of us that says no while everybody else says yes, and it can escalate to punches if the counter-argument is tyrannical enough. 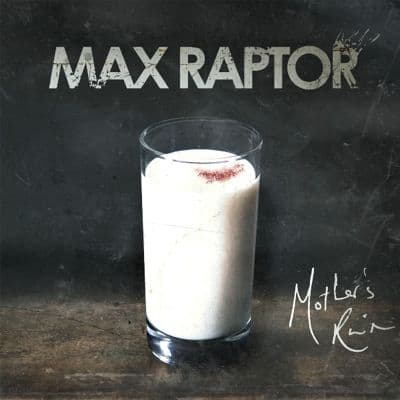 But Raptor throw no punches. They have the strength to, and you keep away from them on the off chance of trouble, but it’s not like metal where the music will charge you down in the streets, challenging your worldview with or against your will, it’s just a powerful force doing its own thing for fun, shunned by the majority, and yet soldiers on through the turmoil for its own benefit, and should you abandon your apprehension you’ll gain a lot, because this band have a lot to offer.

Right from the open string riff of ‘Back of A Barrel Wave’ you know you’re dealing with fire, when the drums, bass, guitar and screams all collide you join the riot. It’s great to see more singing this time round. ‘Portraits’, while a fun album, was devoid of this for the most part, and to see that melody introduced in the first track promises more variety, and that it has! Remember ‘The King Is Dead’? Well, it has a lot of songs in that vein, with those fast, heavy, catchy choruses as the main focus, ‘Taming Of The Shrewd’ to name one, with its exciting anti-establishment themes. One of the many skills of this band is Wil Ray’s ability to rant and yell and yet be crystal clear and coherent with his lyrics. It’s a fast paced start, beginning with two of those signature tracks, but it gets taken down a notch with ‘England Breathes’, the guitars using different settings to alter the mood, and that chorus is one of the most memorable on the disc, and it’s short, encouraging that replay…

The pace changes one-eighty with ‘Grace And Favours’, one of the shorter ones, with some groove added two thirds of the way in. It has that and all the other traits that make this band addictive. Then comes ‘Breakers’. Woah, it’s a surprise how many layers you can notice listening to the same track over and over. This writer has been replaying this ever since the video was released in June. What an introduction that was. It’s filthy, gritty and fast as hell. Those who heard this one first should know, while it’s a great song, it’s not the best representative, because this album is diverse, each track its own, and none of the others sound like ‘Breakers’. As the heaviest it stands out, and then ‘Evangeline’, with an entirely different vibe, also stands out. It has a lighter touch, with melodic vocals that stretch to shouts and a breakdown thick enough to smash concrete. How do you follow this up? Well, you’ll be amazed, because Raptor have a hell of a song next up. The last thing we expected at this point was to hear the plucking of an acoustic guitar, clean singing, and keyboards. It is uplifting, powerful and a great step for the band. It shows that they have a lot of depth, this listener would be thrilled to hear more songs of this nature in the future.

It seems a theme in a lot of heavy albums to bring things back to their peak of aggression at this point. And the pacing here couldn’t be more ideal, as ‘Must Work Harder’ gets us going with its menacing verses, the carefree tone misleading us before the power chords kick in and bring out that cathartic disjointed unease. The ending might not be as memorable, but still a thrill.

Ten tracks? Well that’ll do. You can see the whole thing on a single iPod screen, it’s not too overwhelming. Just a short blast that plays over and over again. Enjoy this one, England, it’s damn, damn good!