So this is probably the initial point where we introduce the band, tell you a little bit of background information and what their music is about. But here lies the problem with Mysteries – there is none! They’re a total mystery. So, end the review then? 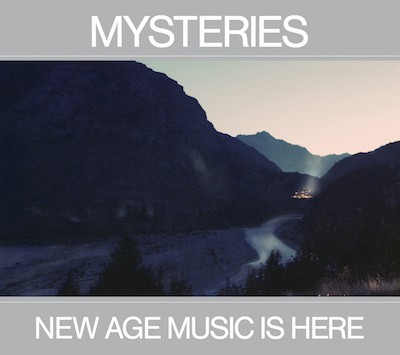 No, Mysteries are much more than that and not just a band clinging to this unique selling point. Background information is totally unnecessary when you have a three-piece band (yes, we do know that at least) throwing themselves out there with their intriguingly unique sound. They certainly let their music do the talking. The band’s debut album ‘New Age Music Is Here’ is to be released by LA-label Felte, who like us, know next to nothing about this allusive band. For a band lacking in identity, their music says otherwise.

When you first start listening to the album, you’ll probably be thinking, “What the hell am I listening to?” and for good reason too. ‘Introduction (New Age Music Is Here)’ is a rambling five minutes of pure noise- clashing drums, crackling bass and various homemade acoustic sounds alongside eerie whispering vocals. In all honesty, it sounds like a child clashing around with some toys. But somehow Mysteries manage to make it sound polished and refined, something which seems to characterise this album as a whole. ‘Knight Take Rock’ draws upon flickering synths, that echo and fade effortlessly like the setting of a starry night sky. It’s one of the more beautiful tracks on the album with the soaring vocals to match. ‘Newly Thorn’ has a gentle synth-pop sound, subtle in all the right ways, whilst ‘Stateless Wonder’ is a sparkling electronic track that builds up from disrupted synths to all out furious drumming in a section that refuses to end.

You get the impression with Mysteries, even just a few songs in to the album, that they are a completely experimental band that doesn’t really have a definitive sound. I mean, it’s a pretty unique sound as a whole, but each song takes has its own individual characteristics. One minute it’s wonderfully subtle and stripped back, the next it’s packed with frantic drums and garish synths. It’s a journey of sounds from start to finish, each corner revealing something new and interesting to fascinate your ears.

‘Motion’ is a slow and steady track, with a very minimalistic sound that focuses on smashing cymbals and frazzled bass for a surprisingly mellow effect. The vocals are bare and emotive throughout the whole of this album, ranging from spiralling falsettos to sinister croons. The sheer variety of vocal techniques is possibly one of the stand-out features of Mysteries in many ways. ‘I Wanna’ sees a more pop-oriented side coming out, with pop-friendly vocals and vivid synths that ooze colour and warmth. And then you have the complete opposite with ‘In The Dark’ with it’s sinister pulsating synths and almost eerie silence at times. It really is impossible to predict what will come next.

‘New Age Music Is Here’ is an album absolutely packed with personality, showcasing some of the most unique and quite frankly strange combinations of sound. It’s an album that is characterised by its complete contrasts in sound, going from bright and vibrant to dark and ominous in the blink of an eye. The only question left to answer is…who the hell are Mysteries?