Penguins Kill Polar Bears are an exciting post-rock band who have just released their first full-length album after two critically successful EPs. If you like emotionally driven and awesomely engrossing music, you’re going to enjoy this. This could become your new favourite album. 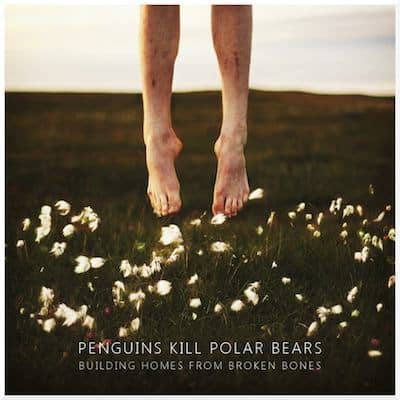 ‘Building Homes From Broken Bones’ is a title filled with optimism and hope which tells a tale of rebirth from destruction, but the songs themselves melancholy and are concerned with death. The nine songs featured are full of pain which is sung by lead vocalist Ben Proudlock in a way that transforms the lyrics into becoming truly believable. His strong Scottish accent adds a unique touch to their songs that stands them apart from the crowd. Each track is a binary of loud, crashing guitars mixed with moments of pure calm featuring echoing vocals and guitars resonant with reverb. The music is a wave of pure emotion with crashing drums like a heartbeat.

This album is a step away from ‘Dawn’ and ‘Vessels and Veins’, which were distinctly less remastered with the rough, imperfect edges of his voice left untouched and sometimes out of time with the music. This album hasn’t got the same revelling in anti-perfection, back-to-basics feel anymore; it’s definitely more of a professional and edited album.

Opening track ‘Pillars’ begins excitingly, tempting you into wanting more. It features uncharacteristically fragile vocals that build slowly with a repetitive bass line, confidently taking its time and featuring an impressive, screaming guitar solo. ‘Blunt’ is beautifully tranquil song and the rich inflections and intonations of Proudlock’s voice emphasise each syllable. He forces you to pay attention to every word. It has a slower pace than other songs, it’s much less in your face and relaxed. It’s memorable without being tawdry.

‘Harland & Wolff’ is the quietest song on the album which steps away from their usual use of drums and strong beat. This makes an exciting change, but the band really excels itself when near the end of the track a total change in tone hits. Throughout the song, ‘death is coming’ is a reoccurring lyric that gives it a creepy tension. Some songs (Scarce, From The Roots) are immersive and painfully emotive. They are deeply engrossing songs that still easily manage to retain their atmospheric awesomeness. ‘Lungs’ is an angrier offer, which features more shouting, powerful vocals in it. We love the crackling, white-noise ending and old-school style microphone style which adds to the feel of it being a scratchy vinyl record.

The tempo is increased (in Penguins Kill Polar Bear’s own way) in ‘Never Rest’ however the exertion in his voice never fails to remain believable and genuinely affecting. ‘Hounds’ implements more factors of storytelling, with the music taking a back seat during verses to really allow the words to take hold and strike.

In ‘Building Homes From Broken Bones’ the vocals are much stronger and technically accomplished than ever before. The songs give the impression of a wounded animal by continuing to be half-pained, half-angry. Reverberation is used heavily and transforms each song into being hauntingly distinctive. It’s easy to hear the band puts their all into every song, making them believably heart-wrenching. It gets under your skin. There is something truly human about this album and it will stay with you for a very long time.