Powerman 5000 have been gracing the music scene since 1991. Known for their unique brand of industrial metal, they have become a staple band for any hardcore metal fan. We review their latest album, ‘Builders Of The Future’, to see if they can still hold their own in such a niche metal genre. 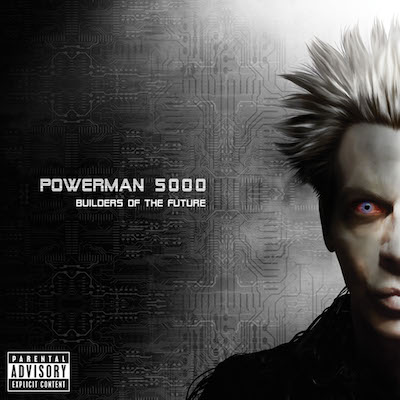 The album opens with the track ‘Invade, Destroy, Repeat’. This track packs a punch, hitting you with an extra large helping of Spider One’s heavy metal attitude. Highlighted with distorted guitars, chugging drums and electro beats ‘Invade, Destroy, Repeat’ sets a high standard for the tracks that follow and that Powerman 5000 are definitely a force to be reckoned with.

Track two is entitled ‘We Want It All’. The momentum set by the previous track is not lost, but this track takes it in another direction. Complete with guitar solos and head–banging rhythms this song could be consider an album anthem. This song allows Powerman to demonstrate the flexibility of their sound, showing that they are not a “one trick pony”.

Track three is a highly infectious tune called ‘How To Be A Human’. This track has edge and some of the catchiest lyrics to grace the airwaves of 2014. After only one listen, you find yourself singing the chorus and dancing along to the memory of such an anthem-like track. Pure rock ‘n’ roll once again forms the foundation of this track, with PM5K members Zer0 and sci55ors creating ass-kicking guitar to accompany Spider-One’s gritty vocals. This track definitely stands out.

Track four sums up this album. ‘You’re Gonna Love it, If You Like it or Not’ is as infectious as previous tracks, but shows off all the Powerman’s industrial rock angles. This track has real funk, making it impossible to sit still. Although at times it lacks bass, this gives Spider-One enough room to truly demonstrate his vocal abilities. They stand out and take centre stage for once. Vocals with grit, rhythms like trance, full throttle guitar. It’s a true metal mash-up.

As the title, ‘Builders Of The Future’, you might expect it to encapsulate the album. However, Powerman 5000 take it to a new level. Demonstrating their true industrial power, this track is pure electronica. Setting a clear divide through the centre of the album, Builders of the Future is yet again infectious and grungy, true Powerman 5000 cool.

Track six is perhaps the most intoxicating track on the album. ‘I Want To Kill You’ is chilling. Sounding more like an 80s electro ballad than Powerman, it introduces an acoustic and mellow break to this forceful album. However, the lyrics alone continue the strength and mysterious nature of the album. This stripped back track is poetic and dark, keeping the listener on their toes.

Track seven, Modern World, brings you crashing back to the industrial ground. Drenched in electro and metal sounds this song is as catchy as the rest of the album. The guitar is the strongest element of the song and brings the track up to par with bands such as Rammstein and Rob Zombie. This industrial anthem truly summarises the Powerman sound.

‘Live it Up Before You’re Dead’ follows suit as another punch of rock ‘n’ roll attitude. This true party track once again reinforces the tone of the album; full-blown alt-rock power. Powerman clearly know the sounds they want to create but unlike so many bands, it does not become lost as the album progresses, it evolves. ‘Live it Up Before You’re Dead’ continues the ROCK! with chugging guitars, swagger and grungy vocals, which battle the constant electro beats, creating a true power piece.

Track nine is perhaps the most evolved track on the album. ‘I Can’t Fu**ing Hear You’ changes the tone of the album, as it slows down the tempo but amps up the attitude. Spider-One’s vocals are once again on top form and move smoothly with the Nine-Inch-Nails style back beats and classic metal guitar sounds. This fresh take on the Powerman sound is captivating and allows the listener to really let go and get involved. As the penultimate track, it also provides and exquisite climax to album as a whole.

The closing track here is called ‘Evil World’. It is feisty, multi-layered and playful. ‘Evil World’ allows the guitar to take centre stage, incorporating classic guitar solos and old-school guitar tones. However the industrial cacophony of the album is stronger than ever and cleverly allows both the guitar and vocals to shine through. This track makes an awesome denouement to the album, allowing it to end with a big bold exclamation mark.

This is a strong offering from the long-standing five-piece. All the members truly leave their mark on each track, but Spider-One’s vocals form an awesome foundation. The album works well as a whole but each track is distinguishable and unique. Powerman 5000 have truly established their one brand of metal and they play it loud! This is how to make an industrial album.

builders of the future reviewPowerman 5000