Pulled Apart By Horses have really undergone some changes since their first, self-titled album. That record was full of endearingly sloppy bursts of sludgy punk, driven with gusto by frontman Tom Hudson’s distinctive scream and fistfuls of white-hot guitar riffs. 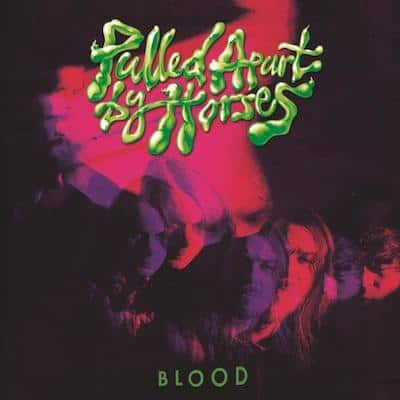 Their second album, ‘Tough love’, was more subdued and refined as the band took extra notes from bands like Queens of the Stone Age and Pixies, and fleshed out their songwriting into something with increased mainstream accessibility. ‘Blood’ feels like a record made by a band who are now wholly comfortable and confident in their sound, making for maybe their most ‘fun’, party soundtrack-ready album yet.

Things kick off ‘Blood’ in high gear with the rousing ‘Hot Squash’, which is founded on a sleazy, very QOTSA-esque stomp and is one of PABH’s most danceable songs to date. In fact, ‘danceable’ quite nicely describes much of the album, with groovy guitar riffs and big, singalong choruses aplenty (‘Grim Deal’, ‘Medium Rare’ and ‘Weird Weather’ are particular standouts in the latter regard). Hudson’s lyrics occasionally fall flat, but the hooks are so catchy that it’s hard to really care too much.

Nothing here feels particularly groundbreaking, but if you’re after loud, no-shit rock music which doesn’t take itself too seriously, this album is for you. However much one might at times miss the looser, more jam-oriented feel of their debut, there’s a sense that the band have evolved into their own creature rather than relying on pure aggression and intensity. Attempting to copy the formula of their first album may have just seen them grow tiresome and quickly burn out, but three albums in, with ever-higher focus on melody and pop hooks, Pulled Apart By Horses have made themselves into a formidable presence on the landscape of modern rock music. Long may their streak continue.