‘Planet Punk’, Rubella Ballet’s first effort in over twenty-five years is the good time vibe of old school punk underlined by the seriousness of the band’s messages, and while all those messages have indefinitely become clichés by this point – statements about how corrupt the system is are way overused now, and obvious to everyone that knows how to breathe, so sorry guys, that one is an undead horse – that doesn’t detract from their power. After all, the world will never stop being full of liars, backstabbers, (*massive sigh*) government conspiracies, killers, war, Illuminati, vampire weddings, Liverpool fans, and death. 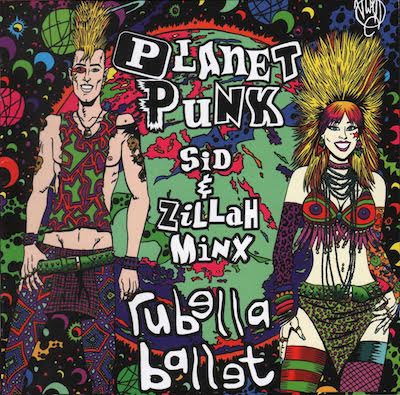 If you’re a true punk fan you will be infuriated with the similarities to Sex Pistols, a band who lost their integrity on day one, and continued to lose it over the successive years (“Lots of butter and cash? The only thing I have to do is hand over the final pieces of my shattered self-image? Sounds beneficial enough.”) but as you’re clearly a music fan (we can tell by your demeanor, and the psychotic way that your eyes glaze over the words) you’ll be able to look over that and see into the colours. Not the bright ones on Zillah Minx’s clothes, they’re way too stark and unambiguous, but the complexity and controversy of the topics.

There are some eerie moments that challenge the musical norms – and hey, punk is the best place for that. Tracks like ‘Killuminati’ and ‘Pandora’s Box’, the former bringing in some concrete pounding distortion and harmonic dissonance with the contrast of calm male vocals blended with Minx’s cockney enthusiasm, while the latter employs a slow and haunting pace, enhanced again by those effective vocals. Tracks like ‘Sedition’ are less impressive, the lyrical themes either a conversation we’ve heard a thousand times or a song’s message we’ve seen more. ‘Victory For the Victims’ is the pinnacle of the style of this album. The dark background of the Hillsborough disaster with the song’s ear popping melody. The same can be said for ‘Silver or Lead’, ‘Wonderful Life’, and ‘You’ll Be Sorry’ has an energetic and engaging pace.

This album is full of gems for the nostalgic punk fan and for the new dogs who are just discovering the good stuff. The rhymes and structure might seem a little forced at times, and a lot of the riffs might not sound like anything new, but this is interesting enough to keep you hooked throughout, and despite the statements we just made, it is pretty unique in terms of its overall style, and it’s fantastic to see a classic punk outfit take up the reigns again and continue to fight the bullsh*t of this deplorable planet. Party on, guys.