Album Review: …And The Hangnails – ‘Rut’

Two people shouldn’t be able to make as much noise as a full band, yet …And The Hangnails prove the mechanics of sound are less about numbers and more about enthusiasm. And guts – lots of guts. 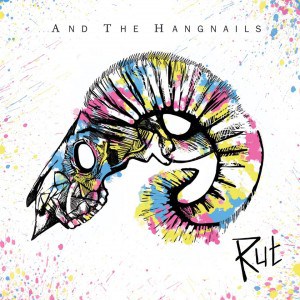 ‘Rut’, the third album from garage rock punk duo …And The Hangnails is a record that dictates it must be played at full volume for maximum impact. Rut is the grown-up album that …ATH fans have been waiting for. The early days of the band saw debut album, ‘No Time For Naysayers’, as a loud, gutsy record with angst reminiscent of adolescents. It was good, shouty, and a comprehensive lesson in the versatility of the drum/guitar pairing.

But ‘Rut’ delivers a far more established sound, with some vocals reined back in and the distortion better managed. Lyrics are clearer, with more heat behind them as vocalist Martyn uses a greater dynamic range than in earlier recordings. More than that, there is generally far more vocal control and tone – which, some may say, isn’t as important on punk tracks. However, it gives the entire album more integrity and intensity, with a range of emotion instead of anger, a bit more anger, a little less anger.

New single, ‘You & I’, is a standout track with a distinctive and clear riff which wouldn’t sound out of place on a Maybeshewill piece. The soundscape tunes keep on coming, with first official collaboration, ‘Bleeding Nose’, featuring Danny Barton (from Junk.) on guitar to add even more depth and resounding meat to the track.

Final track, ‘Maybe’, has the perfect balance of pop, rock and punk rolled into a song more catchy than a fleet of fishermen on a fish farm. The arc of the track, starting chilled out before it ramps up the noise, distortion and emotion, is one of the best delivered by the band to date. It is also one of the longest, with an epic instrumental mid-section that makes you want to whip out the air guitar and drums to play along with it.

If you like Blood Red Shoes and God Damn, two established bands already proving the noise ≠ number of band members theory, then you’ll definitely enjoy Rut. Big sound, solid riffs, some percussive beats which border on filth, and catchy melodies all come together in the best record …And The Hangnails have produced to date.