Hallelujah, Volbeat’s latest album is among us! With cameo appearances from the Harlem Gospel Choir and even one of Poulsen’s pals on the Bagpipes, ‘Seal The Deal And let’s Boogie’ summons Norse, Celtic, Voodoo and Evangelical spirits into a furore. 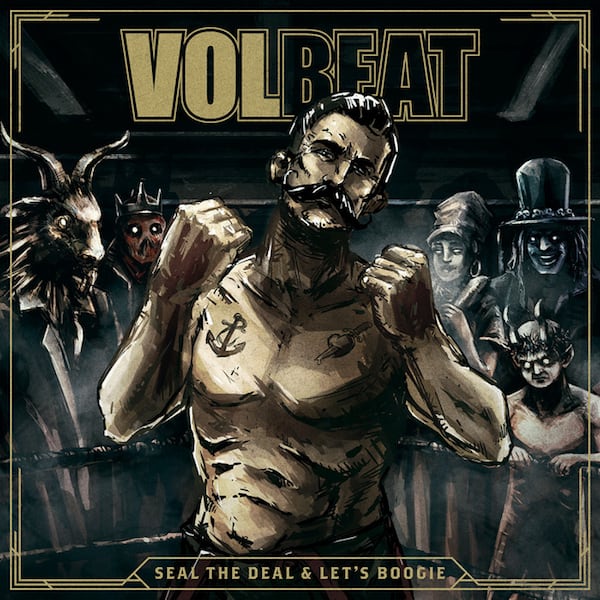 Where previous albums took us deep into the dark west with metallic rockabilly and country, ‘Sea­l The Deal & Let’s Boogie’ has no firm roots in time or space. Guided by his insatiable research into historical cult figures, Poulsen takes us on a journey into ancient Babylonia, Dickensian London and New Orleans, introducing his friends on ‘the other side’.

Starting with Beelzebub, ‘Devil’s Bleeding Crown’ was nefariously leaked onto YouTube pre-release. It is unmistakably Volbeat; stamped with riffs from ‘Guitar gangsters and Cadillac Blood’ and offset by some pretty dark lyrics – from the goth end of Volbeat’s spectrum.

Next up in the Rogue’s gallery, ‘Marie Laveau’, Voodoo Queen of New Orleans, is invoked as Poulsen seeks an audience with is late Father. Catchy and undulating it is more of a good thing.

Ascending from the hellfire, ‘For Evigt’ (Featuring John Olsen) and ‘Black Rose’ (featuring Danko Jones) will join the likes of ‘Lola Montez’ in Volbeat’s immortal hall of fame. Johan’s tremulous beseeching is over-layed with a beautiful harmony and cut with a resonant banjo solo. Strung together, ‘For Evigt’ is power ballad of biblical proportions yet anchored in rusty country roots. For me it’s the jewel in the Devil’s Crown.

At ‘Black Rose’ I thought my phone had shuffled onto my ‘90s Punk rock’ playlist. This is in no way a criticism, being one of my most played genres. Barbershop harmonies and lyrics lamenting the lovelorn teen have the comic tragic feel of Blink 182 and kitsch polish of The Baseballs. This teen spirit is re-kindled in ‘Rebound’ and ‘Battleship Chains’. Teenage Bottlerocket’s 50s highschool melodrama ‘Rebound’ is resurrected in highly enjoyable Volbeat karaoke. Similarly ‘Battleship chains’ covers Georgia Satellites’ foot stomping lust chant – proof of Poulsen’s eclectic tastes (encompassing 80’s hair metal) and Volbeat’s versatility.

‘Let it Burn’ and ‘Goodbye Forever’ are smooth and cathartic anthems. Easy multilevel vocals invite us to join these self help singalongs. The Evangelical Choir power an image of Poulsen ascending on a cloud upto the pearly gates.

‘You will know’ and ‘Lao’s Crossroads’ have their strengths, yet appear to lack the momentum and spirit that permeate through the other tracks. ‘Lao’s Crossroads’, Caravaggio’s ambitious project, is heavy on impressive guitar solos yet segues off into an in-contiguous bagpipe solo. I’ll let you be the judge of this experimental number.

Taking another dark turn down a backstreet in Old Spitalfields Town, London, ‘Mary Jane Kelly’ is an homage to Jack the Ripper’s last wretched victim. Through necromancy, Volbeat recounts her ill-fated final movements – imploring ‘who was the gentleman you had that night?’ Dark stuff set to a reassuringly familiar sound.

Despite being the title track, I find the lyrics to ‘Seal The Deal & Let’s Boogie’ feel jilted against a fusion of steampunk and metal. The cover art depicts a Dickensian fist fight featuring the undead, yet I find this at odds withlyrics such as ‘Boogie’ and ‘Groovy’. To my mind these are more often associated with Austin Powers or a Google mistranslation. Nonetheless it rousing and will undoubtably fire up the circle pits on their forthcoming tour!

The semi-automtic fire of guitar melded with Larsen’s drums of war play us into the final reprise of ‘The Black Rose’ (minus Danko Jones) and ‘The Bliss’ (the less romantic, English version of ‘For Evigt’). ‘Slaytan’ is a fitting reminder of Volbeat’s more industrial heritage – though I doubt this token track will satisfy those who hoped for a heavier album on the stamp of ‘The Strength/The Sound/The Song’.

In its entirety, ‘Seal The Deal & Let’s Boogie’ is an evocation of spirits drawn from time and place immemorial. We are tempted down the road to Perdition, indulging in some guilty pleasures along the way, then offered a celestial salvation. Not only a tumultuous album, it is also educational – using the medium of metal and roll to enlighten us in dark arts, criminology and demonology to name a few!

I sense the undertones of eulogising and celebrating life are a nod to the late and great Lemmy, and Poulsen’s own father, whose influences over the album Poulsen himself acknowledges, but probably underestimates. Amen.