I will start by declaring that this is, without a shadow of a doubt, a brilliant album.  Whether you are an old school Sepultura fan or have only recently started listening to them, Machine Messiah packs an almighty punch guaranteed to satisfy all. Despite there being no Cavalera brothers reunion yet, every track on this album harbours the distinctive essence of ‘Roots’ while tapping into something much bigger, and Green’s vocals do a stunning job at capturing the unique mood of each twist and turn of this epic musical journey. 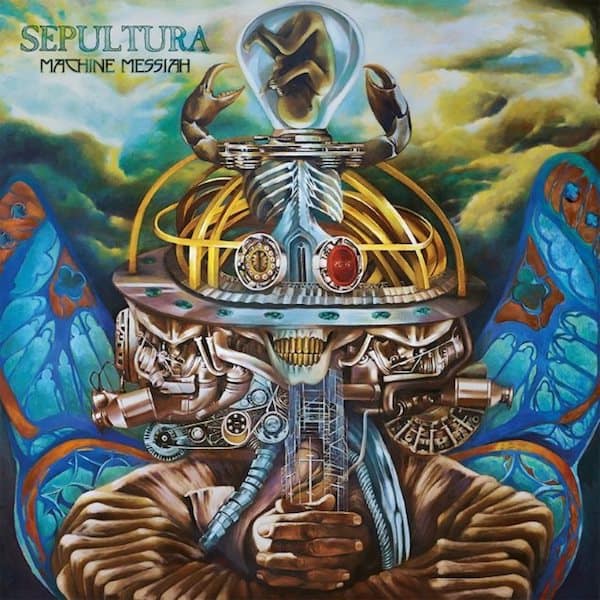 Despite the album’s homage to early material, it does a lot of new things very well. ‘Machine Messiah’, the eponymous album opener, is as far from ‘Beneath the Remains’ ‘Arise’ and ‘Roots, Bloody, Roots’ as is possible. It is smooth, slow, almost droning.  Green’s clean, booming vocals are nothing short of hypnotising, lulling you into a false sense of security for what is about to come.

Then ‘I Am The Enemy’ erupts into existence, shattering the calm. This is the Sepultura older fans know and love; it is the musical equivalate of a sadomasochistic blow to the face. Quick, forceful, powerful, merciless. You almost expect things to carry on this way, the normal way, but ‘Phantom Self’ uses arabesque inspired synthesiser parts and unexpected violins. This theatrical death march sees the band reaching into even more untouched territory, majestically.

The experimental element of the album continues and is perfectly encapsulated in the instrumental track ‘Iceberg Dances’. The guitar is brilliant and extremely varied, even branching into Flamenco styles. With its spanning across a multitube of tempos, genres, moods, this has got to be the gem of the album.

‘Sworn Oath’ takes its inspiration from rock opera, creating an otherworldly vision with its massive symphonic samples and larger-than-life sound. I was reminded of a lot of Devin Townsend’s later work, unsurprising as producer Jens Borgen has indeed worked with Townsend, as well as Opeth, Katatonia and Paradise Lost.

For me, it was these explorations into new musical territory which made this album so spectacular. Sepultura prove that good thrash metal can be simple but they do not shy away from complexity, proving that there is no harm in drawing influence from unlikely places. It is high time that the world appreciate this band for who and what they are now, and stop pining over the Cavaleras.