Single Review: SKATERS – ‘In Your Head’

Skaters are back! The New York based band return with their first new music since 2014’s ‘Manhattan’, an album that brought them international success. From the depths of a mammoth tour schedule and a break with their major label Warner Brothers, Skaters comeback signals a renewed sense of DIY creativity. ‘ROCK and ROLL Bye Bye’, released 24 March 2017 on Yonks Records, is a reliably confident storm back to the scene. 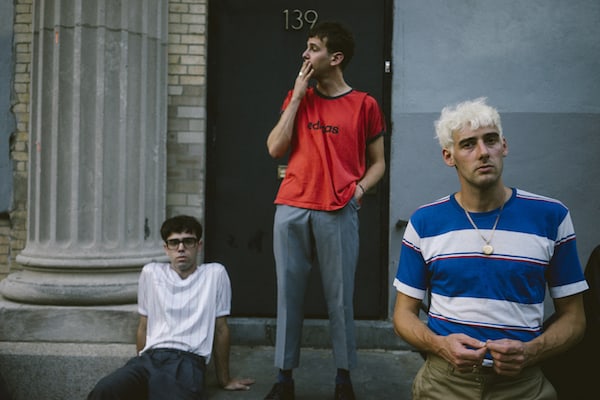 The first single from the new LP, ‘In Your Head’ and its accompanying video were released 3 February. A young woman, portrayed by Thea Norris, walks angrily towards us through the streets of Hull. It’s a kind of update on Richard Ashcroft’s turn for Bittersweet Symphony. Sometimes she breaks into ballet steps, pirouetting and leaping in her tracksuit and sneakers, sometimes she vents her frustration on the people and pigeons she passes. The video seems a nod to the visuals for previous single “Mental Case” which saw Alia Shawkat take a memorable walk through an excessive amount of couples snogging but the result is less dizzyingly isolating and more subtly hopeful.

The song itself is a soaring brit-poppy anthem, a more complex and ambitious arrangement than their previous work. It has a strangely uplifting quality that belies lyrics mourning the ephemeral nature of dating.

“So what’s going on in your head. And who’s been warming your bed.  But I know I’m being insane.”

“You push all the feeling away”

The words seem to hint at the ease avoiding commitment in a generation that grew up with dating apps. They evoke the sense of chance in building a relationship, even beyond the act of loving someone,  the pressures that shape our future without us thinking and lead to people we cared about falling away.

“Everything’s too hard to fix right now. But you couldn’t wait that long. I missed you.”

The lyrics could break your heart but the music is a bittersweet celebration.

The streets of Whitefriargate in the video could be that of any standard grey Northern city centre with its chain pubs, charity shops and budget bakeries. They make no obvious reference to the city’s current status as the EU Capital of Culture. But Hull, where guitarist Josh Hubbard grew up, has been shaking off its grim reputation, a reputation that was perhaps unfairly bestowed in the first place, and gaining attention as a hub for art. The protagonist interpretive dancing her way through these streets is the only clue we get of the place’s growing status as a nurturing environment for creativity.

The idea for the video came out of an online call out for collaborations with the band, something they’ve described as DIWOP2 (Do It With Other People Also) and was shot by Hull based photographer Josh Moore (@shootjmoore). “We reached out on the internet to people and people got back. Conversations where had, relationships forged and collaborations were born….

“This here video is the out come from one of those online conversations… Culture’s newly paved high street, real life, in a real city with real people… you can win them all.”