‘Union Black’ is suddenly like old news. The headlines may have been exciting, and the stories to follow captivating for their day, but now the game has changed and there are new topics to cover, and the headlines of yesterday mean little in comparison. Holy f*ck, that was the dullest metaphor ever made. Back in 2011, this fan bought that album the second it was released and kept going back to it, like iPod cocaine, but the new album is awesome with a capital A. Due to this breakthrough, here’s a revolutionary new idea. It’s pretty out there, so bare with us. Reviews should not be done with text, ratings and visuals anymore. They should simply be a compilation of the weird ecstatic noises the fans make during the first listen, and in this case, there would be a lot of them. We’re currently editing and polishing said dodgy noises, we’ll get them out to you ASAP. 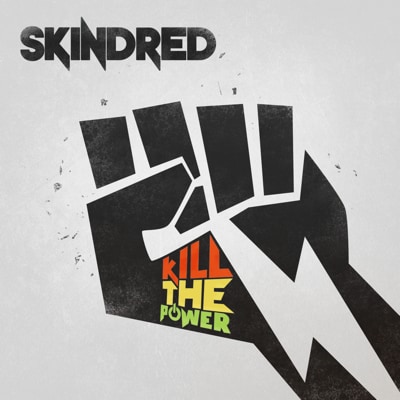 Skindred continue with the sound of the last album, except it’s narrowed and perfected this time, forging itself organically for effortless enjoyment, sometimes bringing forth nostalgia with touches of the vibes of the early days. Opener ‘Kill the Power’ is a fine example of this, immediate and misleading, with shades of ‘Pressure’ and ‘Trouble’, but with a fresh chorus that builds layers each time it comes around. Warm enough yet? Yep, that’s right. Drowning in jumpers and quilts. Elsewhere there are some truly new atmospheres, ‘Ruling Force’ begins with a riff that reminds us of all those ‘Union Black’ tracks, but then the verse kicks in and uneasy electronics surprise and baffle. The breakdown after the second chorus…just awesome. The third track is even more refreshing. It’s a fish dish so engulfed in dubstep that you can’t even taste the fish anymore. That is dubstep, right?  Not brostep? Or any of the other steps? Discarding of course the twelve steps it takes to recover from the frustration of genre specifics. Either way, it’s melodic, ambient and when it gets to the middle all hell breaks loose.

Some truly effective moments can be found towards the middle. ‘World’s On Fire’ for instance. Sure, the [Breed] 77 crew may have beaten him to the title, but Benji Webbe has done something special here. Tight, colourful, and exciting, this is so bloody good. Or to rely on the trusty noise technique…we’re paraphrasing but it went something like this: “Fwaaaarkyeaaaar!” A second later, another succinct track that we believe needs no further comment kicks the sh*t out of your eardrums. Even the 8-bit rendition has a beauty of its own.

Beyond this it gets tamer with a experimental moments. ‘Open Eyed’ features vocalist and presenter Jenna G, who does a hell of a job and is a brilliant female counterpart to Benji, and ‘Dollars And Dimes’, from the high-pitched twanging of melancholy guitars to the distorted heaviness, is melodic and emotional, Webbe’s vocals superbly expressive, and ‘Proceed With Caution’ is phenomenal, thrash and metalcore influence crashing into ‘Dred’s sound like the moon into the Earth. The band are a pretty hectic live ensemble as it is, but their heaviest song to date could excel that madness to cataclysmic levels. It could just be a morbid attraction to violent imagery, darkness and musical depictions of hatred, but this is a favourite of this fan. It’s fascinating and followed up by the gentle ‘More Fire’. This one came as a final surprise. Every Skindred album has to have that track that turns things around, songs like ‘Union Black”s ‘Guntalk’, ‘Roots Rock Riot”s ‘Killing Me’ and ‘Babylon”s ‘We Want’.

Doubtless, this is yet another addictive album that will be replayed many times until the next one is out, and the epicness of it assures us that it will pass the test of time, and stand as one of ‘Dred’s best, maybe even THE best, a pedestal we are leaning towards more and more with each listen. There may be a couple of weak moments, such as the chorus of ‘Ruling Force’ which is slightly monotonous and empty, and feels like it could have brought more to the table, and the conceit of ‘Saturday’ in that we’ve ‘worked all week’ and now have to go craazy, which is a horse so dead it’s half eaten by maggots, but these are the only jarring sections. The latter is still a brilliant song, regardless of the concept, because…well, because it’s Skindred. Brace yourselves for the release date, this one will be a killer.