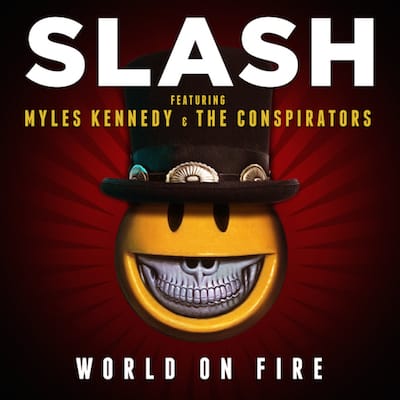 Whatever you want to call him, Slash, the iconic rock legend of Guns ‘N’ Roses fame, and his collaborators are back, for another powerhouse of an album.

World On Fire is both the album title, and the first track released from it, and it is a sure-fire belter; raucous choruses, sporadic solos, and a solid riff-craft that can only be expected from the god of catchy, larger than life solos.

The album is a 17 track marathon, that keeps the energy levels like some sort of banned, imported Red Bull. Cocksure, larger-than-life lyrics, presented thoroughly and professionally by Myles Kennedy (of Alterbridge fame), hold the track together, and add a charm that is missing from many bands of late.

The beloved mad hatter has some choice tracks, which certainly showcase a knowledge and understanding of the craft of guitar that us mere mortals may never truly comprehend. The riffs are stodgy, fat and dirty, the vocals fierce and igniting.

However, it is also a perfect example of basic physics and its application in the music industry; “what goes up, must come down”. Put simply, the album is a corker, and guaranteed to have something for every fan of Slash and his recent, collaborative output. However, that isn’t to say that it is the most innovative or original album produced, and despite being technically proficient, hardly makes a dent when compared to other songs written by the maestro.

Well worth a listen, and for anyone who loves the top-hatted rock god, an essential purchase.