If there’s one man keeping the spirit of metal raw, unprocessed and vicious as fuck, it’s the Max Cavalera. Fashionably late as ever in doing so, when we listened to Soulfly’s new album we were amazed to hear that it rips at your innards like a vengeful vulture, and the creature begins by clawing your eyes out with the speedy opening track ‘We Sold Our Souls to Metal’, a rip ride mellowed only by a groovy bass interlude at the half-way point before bringing a taste of melody and then throwing you right back into the inferno. The title track gives some bounce and appropriately haunting, higher fret notes. The best way to describe the experience as a whole would be to, at this point in the album, warn you that this slower paced, brooding barricade is nothing but…well, a barricade. A barricade that the rest of the album obliterates with the remaining eight tracks. Let’s rip into them. 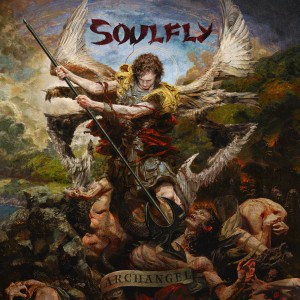 When we spoke to Max last year (bite into that delicious conversation here) he told us that Game of Thrones had become a great source of inspiration to his music, and that influence is garnished all over this ten track dish. That final track title speaks for itself. That said, it’s a monster of a track (a dragon possibly?) and a treat to all metalheads to hear that it’s even more furious than the opening song – and it’s exactly that innate scaly temperament that gives this album its juice. Once you reach the final seconds you’ll realise that neither you, or indeed the album, have taken a single breath the whole way through. This is owed to the handful of songs that soar across a spectrum of brutality in under three minutes. Concise tracks are addictive as hell to this metal fan, but when those aggressionfests are complimented further by Deicide esque riffs (‘Deceiver’) and grindcore drum speeds (‘Mother of Dragons’) the madness is turned up to eleven. Sorry Spinal Tap, I’m a shameless plagiarist like so many before me.

And that’s only the tip of the dragon’s wing. I haven’t talked about the thrashy groove interspersed with touches of Dimmu Borgir in ‘Shamash’ or the circle pit inducer that is ‘Titans’. This is one to take with you. I more or less love everything Soulfly have put out, and every time they do put something out it reinvigorates the metal passion within me. This is the heavy, groovy, thrashy, violent sound akin to the brutality of The Red Wedding in terms of impact. Go hard or fuck off.