Whether you like it or not we all remember being a sullen teenager shut away in our bedroom, trying to understand our turbulent mood swings and listening to CDs on full volume to suit our very emotional needs. None did, obviously, because no one else in the universe had ever been through what we had been through, and nobody understood. Nobody. 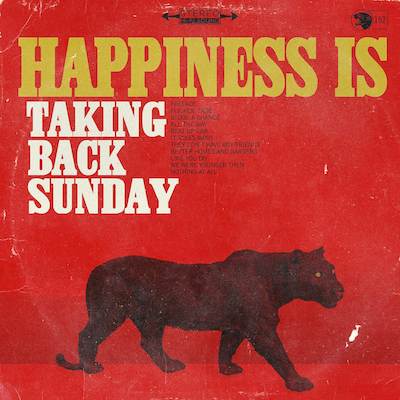 Certain songs have the ability to take us right back to our poster-filled bedrooms, feeling fifteen again. Though we were fans of Taking Back Sunday then, their new album “Happiness Is” unfortunately doesn’t fill us with nostalgic glee but rather a tedious sense of déjà vu. While we have all grown up, Taking Back Sunday seem to have gotten stuck in time with their sixth album.

With high expectations come intense disappointments. The album, bizarrely, starts with an attempt at tension building with an instrumental time filler. ‘Flicker, Fade’ is a crash-bang opening and undoubtedly the best song. From there, the album nosedives into mediocrity. Although ‘Stood A Chance’ is a proficiently feel-good song, it would be wrong to label it as rock. ‘They Don’t Have Any Friends’ begins so promisingly, sounding like a true punk-rock hit but wilts after less than thirty seconds, and unfortunately the lyrics “I’m not angry/I’m not anything at all” seem to be fitting in more ways than one. Meanwhile, ‘All The Way’ is enjoyable but far too repetitive, like most songs on the album.

Everything is decent but nothing is special enough to be memorable. All their safe techniques are included; anything not quite mainstream or catchy is discarded. No risks at all. Taking Back Sunday use the same old formulas that might have been exciting and successful in 2002 but are now as thinly worn-out as your old favourite jeans that you just can’t bring yourself to throw away.

The band seem to have an awareness that this energy-fuelled album will be perfect at a live show to cause a crowd to go crazy, but is sacrificing top-quality recorded material enough for the sake of better gigs? John Nolan’s backing vocals normally adds a more unique sound but in this record he is more like Lazzara’s shadow, simply echoing instead of improving the song with gravelly vocal depth.

An album entitled ‘Happiness Is’ was never going to be eleven miserable ballads to send you into an abyss of depression, so in that aspect it does deliver. The songs are uplifting, even the two mellow tracks, and they are all accessible and palatable even to those who don’t normally listen to rock, but for those of us who have listened to Taking Back Sunday for a long time now, it just isn’t what we expect. It’s hard not to draw comparisons with their 2009 effort ‘New Again’, which divided fans’ opinions and even the band themselves admitted was the worst they had ever created. This album would be tolerable from a new band but we know they can do, and have done, much better. Hopefully next time around they try a different and more mature approach to give us fans what we were expecting this time.

happiness is reviewTaking Back Sunday