Listening to other no-wave bands of the original 1970s/80s time such as DNA and Teenage Jesus And The Jerks, The Coathangers stand up side by side with these bands. However, it’s not just another churning out of the same thing decades later, there’s something new to this stuff. It’s not pure in the no-wave vibe – most simply because it’s catchy as hell! But that ‘don’t give a damn’ attitude still shines at the forefront of their new album ‘Suck My Shirt’, due to be released in the UK on November 3. 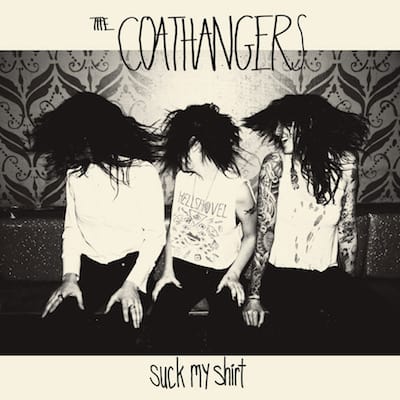 Rough and raspy vocals grab your attention from the word go, with heavy drum beats and spikey chords, there is nothing shy about their sound. However, they are capable of a kind of sweetness, as floaty and dream-like track ‘I Wait’ proves to lull you into a rock lullaby.

Songs flit between atonal noise-ridden tracks and more intricate melody driven ones. There’s a whole spectrum shown throughout the album, which keeps true to their experimental nature. The Coathangers are now heavier than their earlier offerings as they go without a keyboardist which strips their sound to the core fundamentals, without losing any of that big noise from the Atlanta group.

Opening track ‘Follow Me’ sets the tone for the record, fast paced and frenetic, they burst with energy and a low-fi feel. ‘Springfield Cannonball’ utilises subtle vocal harmonies between the trio, with vast dynamics and a chanting chorus. ‘Love Em And Leave Em’ is a particularly memorable track, with a laid back grunge feel to the verses then exploding into a double-time chorus and seemingly purely improvised guitar solos.

If you’ve ever read, seen or heard an interview with any members of The Coathangers, they will often come back to the same essential message about doing what they love because they love it. Simple as that. “We stand for expressing yourself and having a good time…” drummer Rusty Coathanger asserts. “Remember when music used to be fun?” she adds, showing everyone that real people who love music for real are still out there. Not just the money-making manufactured pop for the masses. That message really flows through this album.