This is a raw and aggressive masterpiece of a record. Pure and simple. In this time of polished pap and tweaked albums that take ten years to unleash, The Icarus Line have crafted ‘Slave Vows’ which is less of a decadent collection of carefully managed tracks, and more ferocious statement of vitriolic and pure intent. This is angry guitar music influenced by the likes of Jagger, QOTSA and the mother flippin’ Bad Seeds…more insane than that even. Yep. 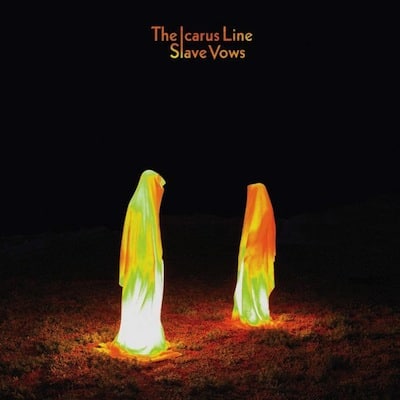 This is a band who have developed some noisey songs and just bloody nailed it, straight off. No frills, just punked up, energy fuelled, riff-ragged tracks. This is nothing more than a band, rocking out in a space, and working their arses off. Proper. If you’ve not heard or seen The Icarus Line yet (err, why?), then you should give ’em a listen. Give this a listen, and you’ll get a damn fine taster of what this band is like live. Crazy. Mental. Mint.

In typical fuzzy, scuzzy Icarus fashion, opening offer Dark Circles emerges with a delightfully dirty wall of sexy feedback (ooh). It’s a slow, seductive offering, something that The Doors might have come up with at their most spaced out. It lulls, and twists; we know something is coming, and we know it’s going to rock and roll with the senses. When it finally arrives (of course by this time, around three minutes) we’ve had chance to get our popcorn and take a seat ready for the show and we are not disappointed. ‘…Circles’ is a track that will surely signify arrival within the live arena for future shows, and it will surely become a passion point for longtime Icarus fans.

This band does pace very well, they are the agents of chaos, and they won’t let us know when it’s all going to come crashing down, despite that fact that we ache and crave for it. We crave that destructive distortion, man. After the 11-minute first tune, ‘Don’t Let Me Save Your Soul’ just freakin’ explodes, and when that happens, it’s an incredible feast for the eyes and ears. A food fight of a feast, mind; messy but it’s damn tasty. Vocalist Joe Cardamone holds us in the very palms of his sweaty, greasy hands, and if you’re in the right mood (and you know we are always in the mood…), you will enjoy getting dirty.

With a band like The Icarus Line, and this is what makes them such an attractive listening prospect, you can turn the volume way, way down, but the sheer sonic terrorism (fuelled almost exclusively by those screeching guitars…) will still find a way to grab you by the knackers. This is never more evident than with ‘Marathon Man’, which weirdly, is also the most catchy effort on the album; it’s a dingy, sleazy dark party anthem that brings with it knives and a shit-tonne of booze. Meanwhile, ‘Dead Body’ comes off like the denouement and break in blistering pace; at seven minutes long it mirrors ‘Dark Circles’ in parts but with a more sinister rock underbelly. Follow-up No Money Music makes us wonder why some alternative music fans are still unnerved by the likes of Brian Warner…um, Marilyn Manson, when there are dudes like The Icarus Line smashing out two minute beasts like this? Channelling an even more twisted Nick Cave, vocalist Joe and his band have created a new anti-anthem filled to the brim with razor sharp screaming geetar (yeah, gee-tar) lines and psychedelic howls. Yes! Finally, As ‘Laying Down For The Man’s frenetic pace boldly challenges (and motivates) with its absolute pomp and determined vigour, closer, ‘Rats Ass’ holds within it, riffage that will remind you about everything great in rock music. This album is uncompromising and undiluted, and in this day and age, as stated above, you should give this album a shot for that reason alone.

All right! So this reviewer likes noisey, screechy and unsettling sounds. If you’re looking for cohesion, go listen to Kanye’s new one (actually, that’s pretty freaky at points too). This is a record for the punks, the pure rockers and even the distortion-drugged shoegazers, there is nothing pretty about this album. Sorry. No, wait! Look, it doesn’t all glue together well, and you might question if there is any real uniqueness to Icarus when we can draw so many classic band comparisons? Well…that doesn’t really matter, okay? Because this deserves your attention. It just does. Switch it on if you think you’re hard enough, and let it take you.