What’s the perfect antidote to a week’s worth of burden and stress? Answer. The weekend, that’s what! The time is now, and Swedish Indie rockers The Sounds are looking to burst back onto the music scene with their ‘Weekend’ album. 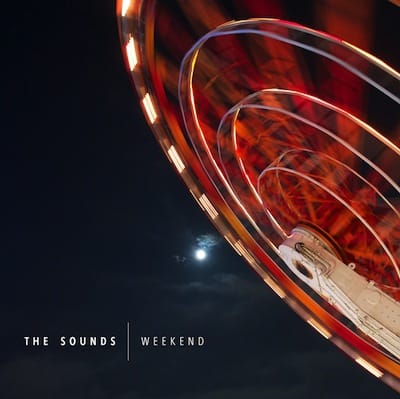 After what seems like an eternity since their last release in February 2012, their playful spark is re-ignited and the band are looking and sounding totally rejuvenated. This is a back to basics album that demonstrates the true power of five great musicians totally in sync pounding out great unwinding grooves the music industry loved so much way back in 2002 with the band’s first album ‘Living In America’.

The record definitely has a running theme of relaxation, taking it easy and enjoying life. Again, this record should be considered as the ultimate wind down after the week long slog with ‘Take It The Wrong Way’ acting as a stand out; this one masterfully combines smooth repeating verses with the powerful, punchy chorus that the band is renowned for. An unmistakable merge of Indie, rock and pop that somehow combines to create tunes that inspire wonderful carefree dancing.

Indeed, it is the diversity and creative buzz that keeps The Sounds from becoming monotonous and mainstream through their material. “I think it’s important for bands to be able to try new approaches, and we’ve never been afraid of trying new paths in our song writing” says band member Jesper Anderburg (keyboard/Guitar) as in new song ‘Shake Shake Shake’ which combines dance-rock bass lines and new era indie guitar wizardry that forms a groove keeping you bouncing off the walls in a room filled with the reverberations of a feel good hit you can’t help but move to. Couple this with the cleverly disguised ‘Great Day’ that begins with humble origins in acoustics and builds to a stellar climax of ground shaking exuberant electro-rock.

On the whole, this album has the aim of sounding “like we just hit the switch on the amps and just started playing the songs”, explains Jesper, “primarily looking for a groove based on five members who have been playing music together for a long time”. These feelings are conveyed perfectly into an album which emanates relaxation but doesn’t lack any of the drive and urgency of a band out to prove their calibre and earn their place in our hearts as we see in their play with textures and effects.

For those of you that find your head involuntarily bobbing at the bass-led party anthems of bands like Bloc Party, ‘Weekend’ is bound to wrestle your attention away from the charts podium seated favourites.