In their sixth and most meaningful album yet, The Used are taking a stand for those who are unrepresented or ignored with ‘Imaginary Enemy’ – and they’re shouting it loud for all to hear. This album is thrilling, captivating and inspirational, with each song having a different political or social message of change. Through their urgent guitars and fast-paced drums they are recruiting an army of followers to their cause. This rousing album sells their believable message to the masses in an accessible way. 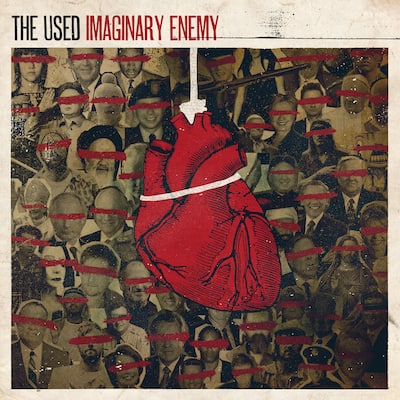 The album starts off as a strong statement of intent with an intriguing excerpt from a politician’s speech in ‘Revolution’ before the song explodes into a cataclysm of guitars and fast paced drums that will set your heart going faster than a machine gun. It is enthralling and exhilarating. ‘Cry’ is so rhythmical it will have you captivated from its first play. It’s less angry than the album’s opener but that’s more than made up for with a melodically well thought out song. It includes an electronic middle section that builds the pressure to an explosive blend of screamo and electrifying guitars. ‘El-Oh-Vee-Ee’ lowers the tempo and incorporates a creepy, hateful edge. This leads to a more accessible chorus which features the voices of a crowd of people, obviously lending to the idea they are for the people and everyone should stand together. It sounds like a cheesy idea, but it actually really works.

‘A Song To Stifle Imperial Progression’ is the album’s angriest track yet. This is sheer brilliance. It encapsulates their dislike of America’s current state of affairs and even if, like us, you aren’t from the US, it holds enough power and force to get you caught up in their political message. ‘Generation Throwaway’ is more anthemic. This song will be incredible live; the slower beat would be perfect to head bang or pound the air to. This leads on to energetic and uplifting ‘Make Believe’ which is a track of rebellion and disappointment somehow without even slightly losing its exuberance.

‘Evolution’ employs a strange twinkling xylophone in the background which lightens the song in parts. The use of violins near the end adds drama and, though unusual, ends up being really effective. The title track takes us back to the band’s recognisable aggressive and melodious style which has gained them popularity for more than a decade. The strong bass is given its time in the spotlight towards the final parts of the song which gives the song a new, exciting dimension. ‘Kenna Song’ is more natural, relaxed and the emotionally driven vocals really shine through with its slower pace. ‘Force Without Violence’ This song really explains itself, it has inspirational power without needing the anger of some other songs and towards the end the spoken verse is powerful and edgy with clever and witty lyrics such as, “intellectual syphilis”. Beautiful ‘Overdose’ winds the album down to its close.

Songs are never without the rhythmical and rousing edge that gave The Used their epic reputation in the first place, and this album definitely means business. There’s no way you can listen without getting caught up in the whirlwind of beefy guitars and bass and angrily driven drums. This album would be incredible even without the deeply meaningful lyrics that levitate it to a whole new level of brilliance. Truly spectacular.