Album Review: Tonight Alive – ‘The Other Side ‘

Home » Album Review: Tonight Alive – ‘The Other Side ‘

We’ve all had our hearts broken, right? And when you’re going through that rough time there’s nothing better than finding an album (we’re not talking Adele or Taylor Swift here) that really speaks to you. Well, we’ve got it right here for you. ‘The Other Side’, the second full-length from Aussie pop-rockers Tonight Alive, is riddled with tales of heartache, regret, anger and of course some kick-ass vocals from lead singer, Jenna McDougall. 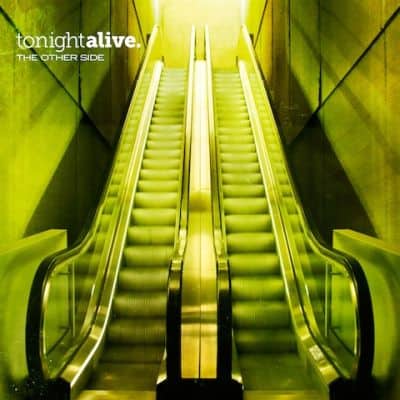 With any young, female-fronted rock band it’s difficult not to get compared to others such as Paramore and No Doubt but in their five years on the scene, Tonight Alive have done a great job of making a name for themselves and breaking out of any preconceived stereotypes. Their high energy sound and passion can really be heard in this album which is one of the things we love about them. The dynamic feel of the first track, ‘The Ocean’ drags us in and leaves us wanting more so we are surprised when the second track ‘Don’t Wish’ begins with an alluring piano intro. However the calm is quickly overrun by McDougall’s fierce vocals. The first few tracks get us into the album by hearing through not only the lyrics, but the music as well, how passionate and angry McDougall sound, which we love.

But as the album progresses we notice the “fire” starts to die down and the ‘pop’ portion of the whole “pop-rock” equation started to show its ugly head starting with the album’s title track, ‘The Other Side’ which, and we hate to compare, really remind us of Taylor Swift in the beginning which is something we don’t expect at all. The song picks up, but never really pulls us in like the others. While there are still more songs on the album that show the band’s impressive angst, we can’t get past the inconsistency of the album as a whole which starts strong and energetic and then leaves us a little bored by the end.

McDougall doesn’t hold back lyrically or vocally in any of these songs and we would hate to be on the receiving end of her wrath after listening to this album. Likewise what started the drive of the album was the music. We love the way that bassist Cam Adler and drummer Matt Best came together to create a stable beat that was quickly followed by Jake Hardy on the rhythm guitar and lead guitarist Whakaio Taahi’s skillful solos. We just wish that this would have kept up for the entirety of the album rather than going into some slower and less lyrically impressive tracks.

If there’s one thing to be said about this record as a whole; it’s catchy as hell. Regardless of the consistency of the album there are some fantastic tracks that really get the blood boiling and take you back to those high school days where broken hearts were about as common as a cup of coffee.

the other side reviewTonight Alive