Born and raised in Hull, Craig “Vinnie” Whitehead is the front man of Vinnie and The Stars, and they’re due to release their third studio album, ‘Development’, in early April. 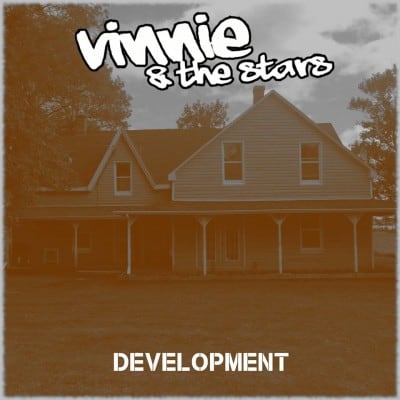 Kicking off the album is the song ‘No Demons’ where front man Vinnie is telling the story of a young boy who is still free from the burdens of adult life. The song opens with a crash of cymbals, and an organ follows pursuit, adding a 70s vibe to the opening track. Vinnie’s lyrics feature a young boy’s daily antics and attitudes giving the whole song a nostalgic feel. The song ends with a soft version of the main chorus, stripped back, and raw, we feel the impact of this wistful tune. It is a strong, thought provoking opening track, opening up personal memories to anyone who listens.

Having never really listened to much, if any, hip-hop music, I was dubious before listening to this album. I’d always deemed hip-hop to be too aggressive, and I admit I fell into the pattern of stereotyping this underestimated genre. The first thing I noticed were Whitehead’s vocals. And not just his strong Hull accent, his style is almost like spoken word poetry, which makes listening to this kind of music much easier. His lyrics struck me as being very personal and expressive about his upbringing in Hull. His lyrics and the stories they tell are personal to him, and the band. This is an element I’ve really been enjoying whilst listening to ‘Development’, particularly in the song ‘You Don’t Know’.

I looked into a few of Vinnie’s influences, and there are some similarities between him and Beck. Beck, of course was one of the first to recreate hip-hop beats with an acoustic guitar, and it’s clear to see why Vinnie looks to this American artist as inspiration for his own hip-hop sound.

Moving through the album we come across heavier songs like ‘Got Enough’. It gets under way with a heavy, fast-paced guitar riff, paired with clashing cymbals and a hint of synthesizers in the background, giving the song an instant psychedelic feel. The band carry the synthesizers into other songs like ‘Talking To The Dead’, adding texture to their music, and contributing to that funk rhythm. The song ends abruptly, with one final punch from the chorus, ending with a final note on the synthesizers, closing the door on this song.

The song that intrigued me on this album was ‘Waiting So Long’. It has a wonderful reggae style guitar riff, and a complimentary base line. It really shows off Vinnie’s skills as a vocalist. It is a cheery song, with its pleasant vocal harmonies, and happy calypso feel. In an album full of angst and stories of frustration, ‘Waiting So Long’ breaks the album up nicely, and proves a little well-needed Caribbean sunshine.

All in all, ‘Development’ the third effort from Vinnie & The Stars is an electric effort with no song sounding the same, and each has their own distinctive element, whether that’s a thrashing guitar, or a vocal onslaught—it kept me on my toes from start to finish. The full album, ‘Development’ is due to be released on April 6, 2015.

development albumvinnie and the stars