The leap from punk rock to goth-electro isn’t one a lot of musicians even think of attempting, never mind succeeding at. However, William Control owns the new genre so well you would think he had invented it. 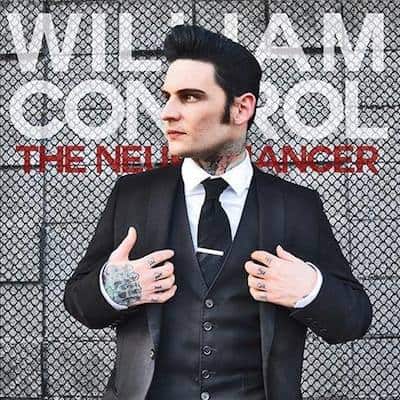 ‘The Neuromancer’ is the artist/band’s third album, and looks set to be his most successful yet, judging by the masses of eager fans waiting impatiently for its official release. Though Francis lends his expert vocals to both Aiden and this project, the sound couldn’t be more different. He is mature and mysterious in a way he wasn’t in Aiden, and it suits him so much more. Though it seemed unlikely that William Control could top their previous two albums, in terms of quality or creativity, somehow they have managed to do just that.

Every album for the band has started with a musically complimented dramatic spoken track as a form of prologue to that album’s story. His albums are conceptual pieces of artwork which have a morbid flow in a storytelling style that is inspired in part by Francis’ fascination with Edgar Allen Poe. It is clear Francis is also an author from his intensely poignant lyrics. His typical anti-religion themes are still thrillingly, unapologetically, prevalent in ‘The Neuromancer’ that fans will remember from his previous albums. Surprisingly, there’s even a love ballad included called ‘Passengers’. Typically this is more of a dark, twisted version of the traditional kind with lines such as, “Oh love, I know we’re estranged/ Like animals, high on cocaine.” It still has a dark kind of beauty to it, without the embarrassing cheesiness. We love this song.

Track number one, ‘Prologue’, gets the album started with spoken word that periodically finds its way back into parts of other songs, and keeps a unique thread of consistency running throughout the album. This leads to ‘Adore’. We were worried. William Control nearly lost us at the first hurdle. His voice sounds like an over-the-top funeral director attempting a try-hard parody emo song. That’s until when, nearly two minutes in, it really kicks in. From that point it sounds like the great track it should have sounded like from the start. The album finally begins to take us down the intriguingly shadowy path it continues on until its bitter, theatrical end. The screams of women add sinister and disturbing elements to ‘The Filth And The Fetish’. It’s shocking, but it serves a purpose, to add uniqueness and to have it stand out from the songs on the album, but it seems like a cover up. A great song doesn’t need to use gimmicks to make it memorable. It gives the impression that William Control really wants to show us how outrageous he can be.

However, it’s through the compilation of uncensored songs of sinisterly melancholic love that really mark the band’s sound. This album, with its gothic twists and electronic turns, shows so well what William Control is about. They sound like no one else out there. Die hard Aiden fans will complain, but we think Francis’ voice suits his newer band even better than before, in all of its deep, dark maturity. Definitely a band to see at Alt-Fest in the UK this year.

A wildly unique album from a wildly talented vocalist.