Yellowcard have strayed from their pop/punk roots with their latest album, ‘Lift A Sail’. The band’s seventh studio album, set to be released on October 7, is their first project since parting ways with both Hopeless Records and their former drummer Longineu Parsons III. 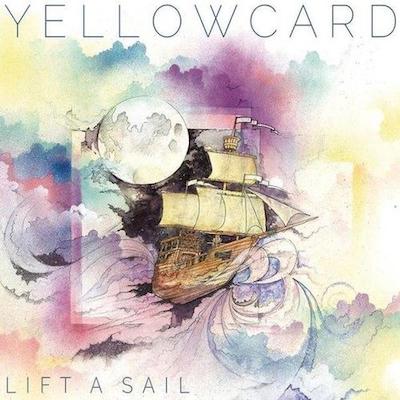 ‘Lift A Sail’ is a perfect culmination of all things great about Yellowcard. The band have said that their goal for this album was to ‘outdo everything they’d done before’ and we’ve got to say, they hit the nail on the head. Anyone can throw together a rocking three minute song, but to make a collection of thirteen of those tracks, each really standing out on their own and adding something new to the album as a whole, is a huge undertaking.

The album delivers a purely sincere and heartfelt tone from the very beginning with the instrumental intro track ‘Convocation’, an evocative string arrangement from violinist, Sean Mackin that lures us in with enticing melodies, leading into the heavy drum intro of ‘Transmission Home’. The abrupt change in tone between the two tracks delivers a welcomed contrast that sets the tone for a great balance through the album. This track is a fantastic showcase of rocking guitars from Ryan Mendez, brilliant vocals from Ryan Key, solid bass lines from Josh Portman and an impressive intensity from guest drummer, Nate Young of Anberlin.

This record is a true display of the evolution of Yellowcard as a band. With this album comes a more mature, albeit slightly gentler, sound from its predecessor, ‘Southern Air’. The first single off the album, ‘One Bedroom’ is a solid testament to that with a softer sound and Key’s honest vocals hovering over a steady acoustic rhythm while the song builds. There’s a balance of ballads and anthems on this album that errs on the side of epic with tracks like ‘Illuminate’, a heavier track that pushes from start to finish with an anthemic theme standing strong throughout.

This album doesn’t run short on love songs like ‘Madrid’ or ‘MSK’, a beautifully constructed ballad that offers another display of Keys signature lovelorn lyrics, ‘I would dig a hole through the earth and crawl to get to you’ topped with effervescent violin melodies to make this a standout track.

Yellowcard have always been a difficult one to categorise with a conglomeration of different genres over the years, and of course, a violin which just confuses everything in a rock band. Although we might not know what to call Yellowcard anymore, we know that it’s damn good, and really, that’s all that matters.